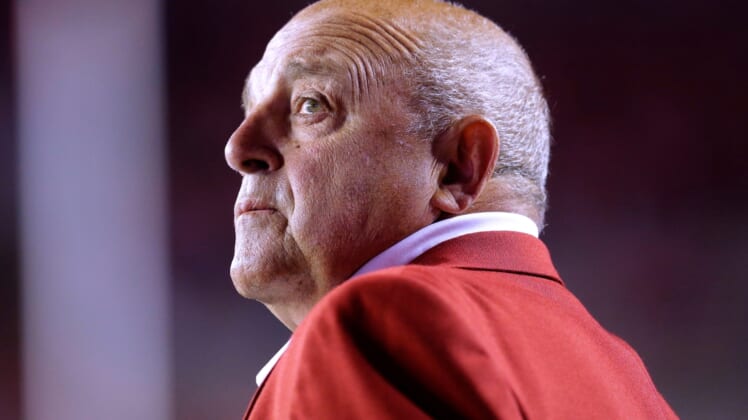 Wisconsin athletic director Barry Alvarez is shown on the sidelines during the first quarter against Utah State at Camp Randall Stadium on September 1, 2017, Madison, Wisconsin.Ncaa Football Utah State At Wisconsin

The University of Wisconsin is honoring former coach and athletic director Barry Alvarez by naming their home field in his honor, school officials announced on Friday night.

Alvarez, 74, retired over the summer after 32 years at the university.

The field will be called Barry Alvarez Field at Camp Randall Stadium starting in 2022.

“Barry Alvarez has had an immeasurable impact on the UW-Madison campus, beyond the state and in college sports,” said chancellor Rebecca Blank at Friday’s ceremony. “And that type of career deserves recognition at the very highest level.

Alvarez said he was moved by the tribute.

“I’m touched. I’m honored,” said Alvarez. “That means so much to me to have my name on this field. Thank you for this. For my name on the field, that is very touching and very meaningful to me.”

The school is also set to honor Alvarez during Saturday’s game against No. 14 Michigan.

Alvarez spent the past 18 seasons leading the Badgers’ athletic department after 16 seasons as the football coach; he held both positions for two seasons. During his tenure, Wisconsin sports won 16 national team titles and 74 Big Ten regular-season or tournament championships. He was named Under Armour Athletic Director of the Year in 2017-18.

Alvarez arrived in Madison in 1990 and turned a downtrodden football team into a perennial Big Ten contender, leading them to three Rose Bowl titles until he stepped aside in 2005 to concentrate on his duties as athletic director.