The Tennessee Titans and Jacksonville Jaguars took the field on Saturday night with the AFC South and a home playoff game at stake.

After both teams honored Damar Hamlin before the game with a group prayer, they took the field for what most believed would be a one-sided game. After losing six consecutive games, though, Tennessee came out strong in the first half with an early 13-7 lead after two quarters.

Defenses took control in the second half. After trading field goals to open the third quarter, Jacksonville turned a Josh Dobbs interception into three more points. The Jaguars and Titans then traded 3-and-outs, with Tennessee leading 16-13 with 10 minutes remaining in the fourth quarter.

Ultimately, Jacksonville’s ability to create takeaways changed everything. While its offense struggled to move the ball, the Jaguars’ young defense stepped up in big moments and clinched an AFC South crown.

Let’s dive into the winners and losers from the Jacksonville Jaguars’ AFC South-clinching victory.

Winner: Jaguars’ defense steps up in second half

Trevor Lawrence and Co. have generated most of the praise for this second-half run in the regular season. The credit is certainly deserved, but this defense flew under the radar. Jacksonville allowed the sixth-fewest points per play (0.323) and really elevated its game late in December. After putting on a defensive clinic in the second half, everyone now recognizes the Jaguars’ defense.

Takeaways decided the AFC South. It started with cornerback Tyson Campbell’s third-quarter interception, in which he returned 29 yards to set up a field goal. Josh Allen and Travon Walker then dominated off the edge to force consecutive 3-and-outs. Finally, Rayshawn Jenkins strip-sacked Dobbs and Allen scooped it up and then ran for the game-winning touchdown. The Jaguars’ defense is why Jacksonville will be hosting its first playoff game since Jan. 7, 2018.

Since becoming the Jaguars’ starting running back in Week 6, Travis Etienne has shown flashes of becoming an NFL star. He averaged 5.3 yards per carry with 1,068 scrimmage yards and five touchdowns across 11 starts. On the national stage with an opportunity to emerge as one of the next great NFL running backs, Etienne ran into walls. 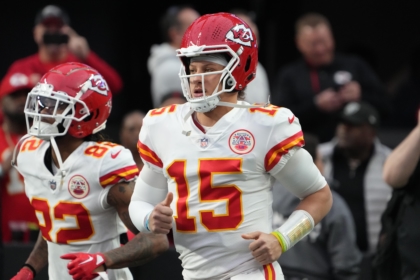 It doesn’t come as a surprise, considering Tennessee boasts one of the best run defenses in the NFL. A defensive front that held opponents to 65.6 rushing yards per game and 2.8 yards per carry in its last 12 contests didn’t let Etienne experience anything positive on Saturday. He turned seven carries into 17 yards, eventually becoming a complete non-factor because Jacksonville also can’t trust him in pass protection.

Winner: Derrick Henry puts Tennessee Titans on his back

Tennessee rested Derrick Henry in Week 17 for a reason, it wanted to unleash him on Saturday night. With two weeks of rest, the 6-foot-3 and 247 lb. running back carried the Titans’ offense. In the first half alone, he turned 18 touches into 90 scrimmage yards with a vintage stiff arm on a big run that set up a touchdown.

We can’t even really criticize what happened in the second half. Jacksonville threw everything it had to stop the run, putting pressure on Dobbs to try and win the game. The plan worked, with Tennessee scoring just three points in the second half and Henry limited to 38 rushing yards on 13 carries. If not for Henry, this would’ve been even uglier for the Titans.

There will be plenty of finger-pointing in Tennessee after this ugly downfall. A seven-game losing streak is partially due to injuries, but offensive coordinator Todd Downing is even more responsible for the Titans blowing the division. Tennessee averaged just 15 points per game during the seven-game skid, barely averaging 300 total yards per game (300.3) and it all came with a 37.5% third-down conversion rate. It shouldn’t take Mike Vrabel much time to realize the Tennessee Titans need a new offensive coordinator.

Think back to the 2022 NFL offseason when Jacksonville signed Christian Kirk to a four-year, $72 million contract. Many ridiculed the Jaguars’ front office for the deal, making a receiver without a 1,000-yard season one of the highest-paid NFL players. Look where Kirk is now, making Jacksonville look brilliant for the move.

Already entering with career-highs in receptions (78), receiving yards (1,009) and touchdowns (7), Kirk added to his breakout campaign on Saturday. The lone standout on the Jaguars’ offense earned $1 million in bonuses by eclipsing 1,100 yards and 80 receptions on the season. Credit to the Jaguars for striking gold with Kirk and shame on Kliff Kingsbury and for never utilizing him correctly for all those years with the Arizona Cardinals.