Winners and losers from 2019 NBA Draft 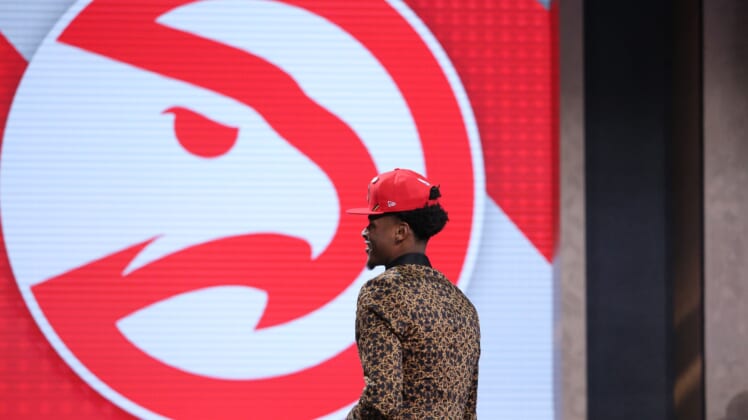 The 2019 NBA Draft took place Thursday evening in Brooklyn with a whole lot of fanfare. As wide open as the league is right now, the draft itself might have been among the most important in recent history.

From the get go, new general manager David Griffin and the Pelicans dominated the landscape. The Atlanta Hawks showed that they might continue being one of the most-entertaining young teams to watch.

On the other end of the spectrum, we were left wondering what the plans might have been in both Phoenix and the nation’s capital. These are among the biggest winners and losers from the 2019 NBA Draft.

We knew that first-year general manager David Griffin was looking to trade the fourth overall pick New Orleans acquired in the Anthony Davis trade. We didn’t know the type of haul he would get.

In the end, New Orleans ended up grabbing consensus No. 1 player Zion Williamson first overall. It then picked up a raw but talented forward in Jaxson Hayes before getting potentially the steal of the NBA Draft in guard Nickeil Alexander-Walker with the 17th pick. Alexander-Walker is considered a solid two-way player that shot nearly 40 percent from distance during his two seasons at Virginia Tech.

Young general manager James Jones is already looking to make his mark in the desert. Unfortunately, his first draft didn’t necessarily go according to plan. Moving a solid forward in T.J. Warren and an early first-round pick to Indiana as a cash drop made no real sense. We figured Warren had more value than that.

Phoenix then passed up on the opportunity to add one of the draft’s best guards by moving down from sixth overall to the 11th pick for an unimpressive Dario Saric. The Suns ultimately ended up wing Cameron Johnson at 11. He drew red flags heading into the draft due to hip issues. Most had Johnson as a late first-round pick. He’s also a wing on a roster that still boasts Josh Jackson and the above-mentioned Saric. What ever happened to getting that young point guard to team up with Devin Booker? We hate to inform the Suns, it’s not Ty Jerome. Oh, and the addition of Aron Baynes in a trade with the Celtics made no sense.

As expected, Williamson went No. 1 overall to the New Orleans Pelicans. That was about as sure of a bet as you could get heading into the draft. He’s a winner for living up to the expectations we’ve seen surround this dude since his underclassman days in high school. That brings a lot of pressure itself.

However, New Orleans’ decision to trade Anthony Davis less than a week before selecting Williamson makes this Duke product a real winner. He now has the keys to the Bayou and will be the face of what promises to be a talented young team in New Orleans. It could not have worked out any better for Mr. Williamson.

Selecting 28th overall, the injury-plagued Warriors had an opportunity to go with the highest ceiling player available. That included likely lottery picks, wing Kevin Porter Jr. and center Bol Bol. It was a dream scenario for the five-time defending Western Conference champs.

Instead, the Warriors went with a play-now guard in Jordan Poole who has limitations. Poole could be a member of the rotation early on, especially with Klay Thompson recovering from a torn ACL. He also has a decent outside shot. But with Bol and Porter available, this seemed to be a major reach.

Gersson Rosas’ first draft as the Wolves’ president of basketball operations got off to a rip-roaring start when he dealt the 11th pick and struggling forward Dario Saric to the Phoenix Suns for the sixth pick. In and of itself, what was a stellar move. But the decision to add Texas Tech guard Jarrett Culver at six is what stands out the most.

We knew that Minnesota was looking for a point guard to team up with stud big man Karl-Anthony Towns. That’s exactly what it got in a player of Culver’s ilk. The Texas Tech product averaged 18.5 points and a gaudy 6.4 rebounds while shooting 46 percent from the field last season.

These Celtics moved up and down the board throughout Thursday evening. The hope was that they’d be able to use one of their three first-round picks to get assets for down the road. Meaning, the Celtics need to do something in free agency to help offset the likely losses of Al Horford and Kyrie Irving. That did not happen.

Sure Boston picked up a future first-round pick from Phoenix (via Milwaukee). But Danny Ainge botched the draft in a big way. He went with a limited Romeo Langford at 14th overall when much higher-rated players were in the board. Ainge then selected Tennessee power forward Grant Williams at 22. That was also a reach. We’re not sure what’s going on Boston. But it’s not great.

We’re not going to sit back and say that Darius Garland with the fifth overall pick was a reach for Cleveland. Despite having played only five college game to injury, he has all the physical traits to help rebuild this team around. Though, it does seem teaming Garland up with last year’s first-round pick, Collin Sexton, might be an issue with both being ball-dominant guards.

Despite this, the Cavaliers’ draft class as a whole was amazing. Cleveland was able to pick up a sharp-shooting small-school product in Dylan Windler with the 26th pick. All he did was average 21.3 points and 10.8 rebounds while shooting 43 percent from the field last season. Not to be outdone, the Cavs traded four second-round picks to Milwaukee for wing Kevin Porter Jr. He was projected to be a top-15 pick despite injury and off-court issues at USC last season. This was a great draft haul for GM Koby Altman and Co.

Bol was considered a top-five talent heading into the draft. Concerns over leg injuries and maturity plagued the 7-foot-2 big man. Despite this, the Oregon product was expected to go somewhere within the top-20 picks. Once he fell out of the first round, more concerns over injuries popped up.

Bol ultimately fell to the Miami Heat (to Denver) with the 45th pick in the draft. For a dude that averaged 21.0 points and 9.6 rebounds in limited action for the Ducks last season, this most definitely was not a great look. Here’s to hoping Bol balls out and proves NBA teams wrong moving forward.

We can question Atlanta’s decision to move up from the eighth spot to No. 4 for Virginia forward De’Andre Hunter. On the surface, it seemed to be an overpay. That’s until we realize how good of a fit Hunter is going to be for this young Hawks squad. It was made better by the fact that Atlanta didn’t have to exhaust the 10th pick in the move up.

With that 10th selection, the Hawks nabbed a top-five talent in that of former Duke standout Cam Reddish. If Reddish ever shows consistency, he’s going to be a star in the backcourt with Trae Young. Add in John Collins and Kevin Huerter. Yeah, Hawks general manager Travis Schlenk has built a tremendous young core.

That tweet pretty much says it all. Washington reached for a low-ceiling player within the top-10 picks of Thursday’s draft. We’re not here to say that Hachimura will fail to be an effective NBA player. But one of his strengths being a “guy you can root for” has more of a feeling of a second-round pick.

As it is, the forward was projected to go anywhere between 15-25. Given that Washington should be in a full-scale rebuild mode, the team’s front office failed big time here. That includes pushing back against the idea of adding a ton of young assets by trading Bradley Beal. As has been the case numerous times recently, the Wizards are a major loser.