WATCH: Wisconsin controls the ground and the game in win over No. 9 Iowa 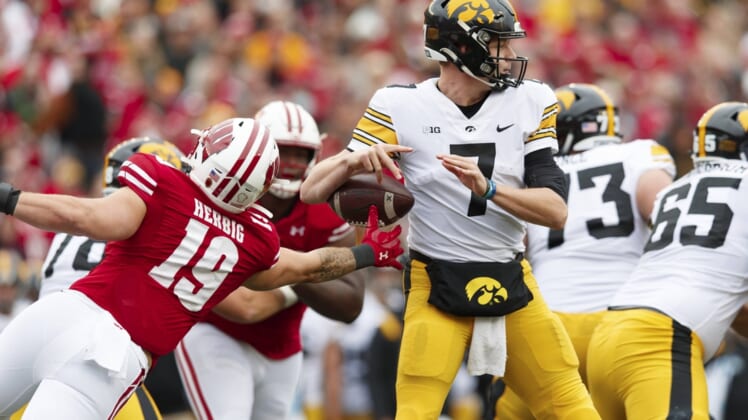 Graham Mertz scored on a pair of quarterback sneaks and passed for another touchdown as host Wisconsin defeated ninth-ranked Iowa 27-7 on Saturday to climb back into the Big Ten West race.

The Badgers (5-3, 3-2 Big Ten), who started 1-3 with two conference losses, would claim the West title if they win their remaining four games. The Hawkeyes (6-2, 3-2) have lost two straight after climbing to No. 2 in the AP Poll.

Wisconsin capitalized on three fumbles for a 20-0 halftime lead, holding the Hawkeyes to just 17 yards total offense in the first half.

Wisconsin, which entered with the nation’s top-ranked run defense at 53.3 yards per game and 1.9 yards per carry, held Iowa to 24 yards on the ground on 30 attempts. The Hawkeyes finished with 156 total yards.

After stopping the Hawkeyes on fourth-and-one, Wisconsin drove 60 yards, pushing the lead to 27-7 on Mertz’s 1-yard sneak with 12:54 remaining.

Iowa wasted a huge defensive stand midway through the second quarter. Wisconsin recovered Petras’ fumble at the Iowa 8, but the Hawkeyes stopped fullback John Chenal on fourth down from the 1.

Two plays later, the Badgers recovered Ivory Kelly-Martin’s fumble at the 1. Mertz sneaked over on the next play to make it 17-0.

Wisconsin recovered a muffed punt at the Iowa 18 but had to settle for Larsh’s 32-yard field goal for a 20-0 lead.

Wisconsin, which lost 28-7 last season at Iowa, has won five of the last six in the Heartland Trophy rivalry.