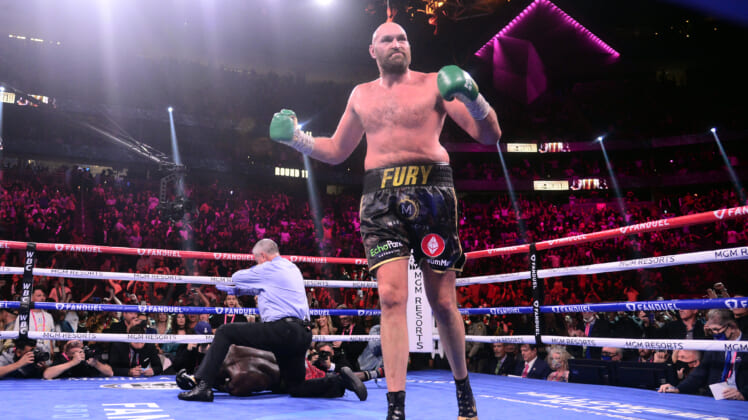 Heavyweight king Tyson Fury defended his WBC title with a destructive win over Dillian Whyte on Saturday, in front of 94,000 plus fans inside Wembley Stadium.

In the sixth round of the pairs battle of English heavyweight stars, Fury landed a fast and nasty uppercut that Whyte did not see coming. The shot floored “The Gypsy King’s” foe almost immediately. While the mandatory challenger to the WBC belt did make it back to his feet before the 10-count, he was unable to keep his balance and the referee chose to mercifully bring the fight to a close with no time left in the round.

Throughout the bout, Fury was clearly the better fighter. Landing 76 of his 243 punches compared to Whyte scoring on just 29 of his 171 attempts. While Fury’s 31% and 20% accuracy rate on his total strikes and jabs. respectively, was nothing to write home about, he made his power punches count. Of the 100 power punches thrown, he nearly landed on half of them. Wearing down his foe and setting up his eventual victory in the sixth.

Following his win, Tyson Fury revealed that he promised his wife Paris he would retire following his third fight against Deontay Wilder — a series of bouts he went 2-0-1 in. However, he took this matchup against Whyte as a thank you to his fans in his home region. Now with that goal achieved, Fury suggested his career may finally be at an end.

“I promised my lovely wife Paris of 14 years that after the Wilder 3 fight that would be it, and I meant it,” Fury said [h/t ESPN]. ” It was a great trilogy and I meant that…

If Fury decided to end his career now, he would have finished unbeaten at 32-0-1 with 23 knockouts, and pivotal victories over Wilder (twice), and Wladimir Klitschko in a sure-fire Hall-of-Fame career.