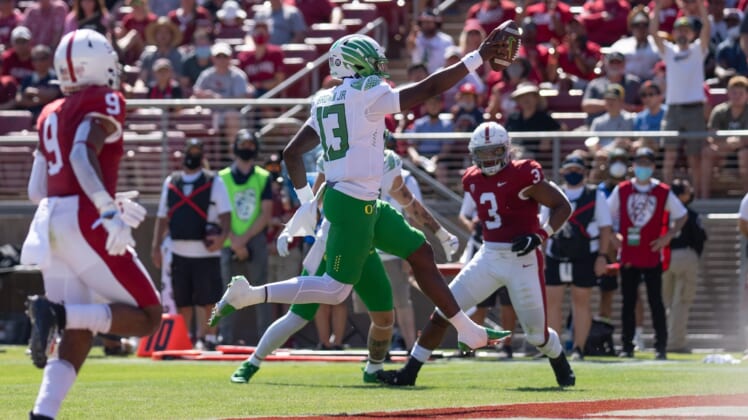 The Oregon-Stanford rivalry has seen some close games in its recent history, and Saturday afternoon in Palo Alto, Calif., will go down as an all-time stunner.

Stanford scored a touchdown on an untimed down on the last play of regulation, then scored on a 14-yard touchdown pass from Tanner McKee to John Humphreys in overtime and held on for a 31-24 upset of the third-ranked Ducks.

Oregon had the ball last and was forced to go for a first down on fourth-and-8, but Anthony Brown’s pass fell incomplete to end the game.

The Ducks (4-1, 1-1 Pac-12) overcame a 10-point halftime deficit to take a 24-17 lead in the fourth quarter, scoring on three consecutive drives in the second half.

But Oregon’s defense, without its top two players for much of the final Stanford drive and all of overtime due to an injury to Noah Sewell and a targeting ejection to Kayvon Thibodeaux, couldn’t preserve the lead.

Oregon also lost one of its top running backs this season, CJ Verdell, to a third-quarter foot injury. Verdell had 63 rushing yards and a touchdown before getting carted off the field.

Stanford (3-2, 2-1) stopped Oregon on downs near the goal line just before halftime to take a 17-7 lead into the break, and seemingly had all the momentum. But they needed a major comeback to win.

Stanford got the ball with 1:59 left to play at its own 13-yard line with a chance to tie. McKee, shaken up after a hard hit, got the ball to the 2-yard line. A defensive holding penalty on fourth down gave the Cardinal one more chance with an untimed down, and McKee hit Elijah Higgins for a touchdown pass to send the game to overtime.

In overtime, McKee found Humphreys and Stanford held to get the win. McKee went 20 for 33 for 230 yards and three touchdowns.