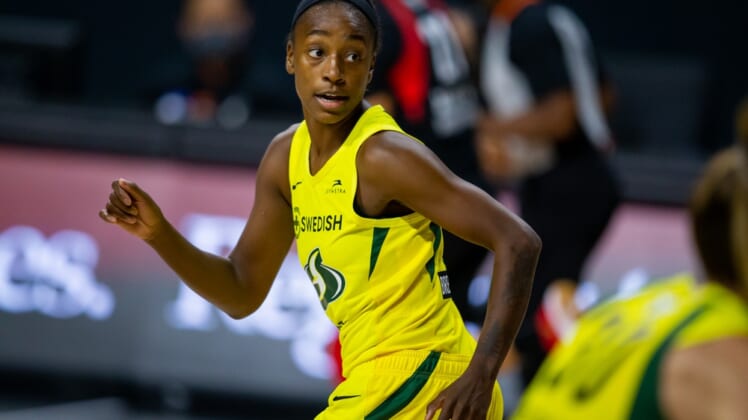 After having their six-game win streak snapped by the Dallas Wings, the Seattle Storm got themselves back in the win column with a 95-71 victory over the Atlanta Dream.

The Storm are now tied with the Connecticut Sun for the best record in the WNBA at 8-2 while the Dream drop to 4-5 after losing their third straight game.

The Storm had six players score in double figures in the blowout win. Reigning Western Conference Player of the Week Jewell Loyd led the Storm with 18 points, four assists and two steals. In her four games in June, she is averaging 21.5 points and 4.5 assists.

Breanna Stewart followed with 15 points, nine rebounds, five assists and two blocks while Stephanie Talbot came off the bench to score 13 points on an efficient 5-of-6 shooting from the field while connecting on three three-pointers. Sue Bird and Mercedes Russell each scored 11 points while Katie Lou Samuelson scored 10 points.

It was a rough night from the field for Courtney Williams and Odyssey Sims as they combined to shot 8-of-32, including 0-of-11 from distance

Jewell Loyd started the game off hot for the Storm, scoring 13 of her 18 points in the first quarter while shooting 5-of-6 from the field. Breanna Stewart also chipped in eight first quarter points in helping the Seattle Storm pushing to a 28-23 lead.

The Storm continued to put the pressure on the Dream in the second quarter, opening up a 10-point lead four minutes in. The Dream, however, responded well thanks to a 10-point quarter from Tiffany Hayes but still ended the half trailing 45-43.

Through the first three minutes of the third quarter, both teams were evenly matched trading buckets back and forth ending with the Dream taking a 51-49 lead. From there, the Storm outscored the Dream 20-10 to take an eight-point lead into the fourth quarter.

It was in the fourth quarter that the Seattle Storm put the game out of reach, outscoring the Dream 26-10 in cruising to victory.