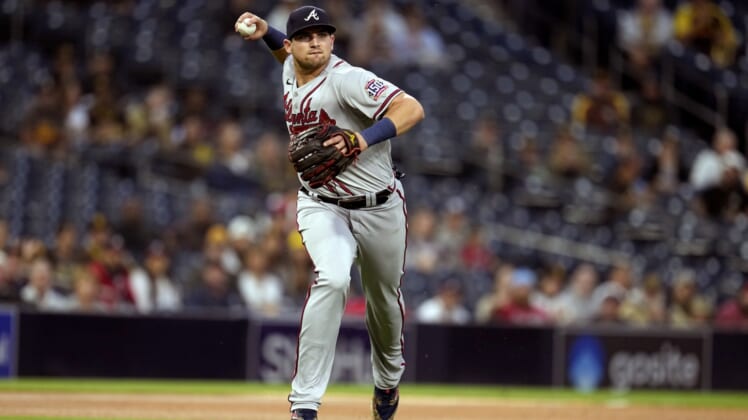 Fernando Tatis Jr. hit a tiebreaking homer in the top of the seventh inning as the Padres beat the Atlanta Braves 6-5 on Friday night in San Diego in the conclusion of a game that was suspended in Atlanta on July 21.

The 419-foot homer was the 41st of the season for Tatis, tying him for second in Padres history with Phil Nevin (2001).

The Padres led 5-4 after 4 1/2 innings when the July 21 game was suspended after a rain delay of approximately three hours. The game was seven innings long because the original contest was the second contest of a doubleheader.

The finish included an hour-long delay due to heavy rain and lightning in typically clear downtown San Diego.

Atlanta pinch hitter Adam Duvall slugged a tying one-out homer in the sixth inning off right-hander Daniel Hudson (5-2). The 408-foot blast was Duvall’s 38th of the season and 16th in 48 games with the Braves since being acquired from the Miami Marlins at the trade deadline.

Braves left-hander Will Smith (3-7) served up the leadoff homer to Tatis on a full-count fastball. Atlanta’s National League East lead over Philadelphia fell to 1 1/2 games, pending the Phillies’ result against the Pittsburgh Pirates.

San Diego right-hander Mark Melancon struck out two in the seventh to record his major-league-leading 38th save. Freddie Freeman walked with two outs, and Ozzie Albies’ drive to left was caught on the warning track by Jake Marisnick to end it.

The Padres are six games behind St. Louis in the hunt for the NL’s second wild card, pending the Cardinals’ result against the Chicago Cubs in the second game of a doubleheader.

In the first part of the game two months ago in Atlanta, the Padres scored four runs in the first inning off Braves right-hander Bryse Wilson. Eric Hosmer hit a sacrifice fly, Wil Myers drew a bases-loaded walk and Ha-Seong Kim delivered a two-run double.

San Diego added a run in the top of the second on Jake Cronenworth’s run-scoring single.

Padres right-hander Reiss Knehr lasted just 1 2/3 innings and gave up three runs on one hit and two walks with one strikeout.