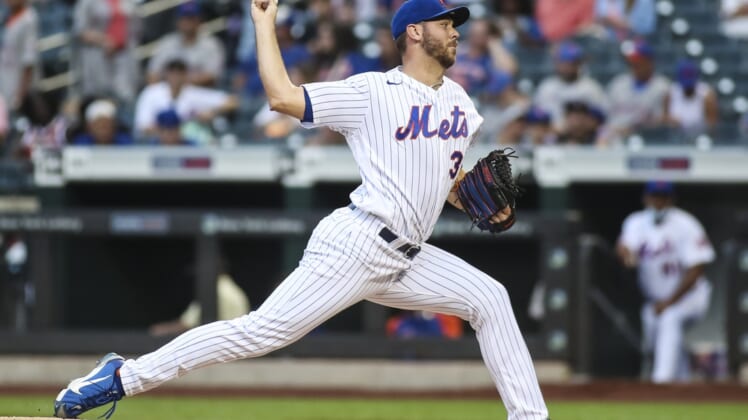 Pete Alonso continued warming up for Monday’s Home Run Derby by homering for the second straight night Saturday, when his third-inning solo shot proved to be the difference as the New York Mets salvaged a split of a doubleheader with a 4-2 win over the visiting Pittsburgh Pirates.

The Pirates earned a 6-2 win in the opener, when Tyler Anderson tossed five strong innings and hit the tie-breaking homer in the fifth.

The split was the eighth in 10 doubleheaders this season for the Mets and the second in three twinbills for the Pirates.

The Mets never trailed in the nightcap, when Jeff McNeil laced a two-run double in the first inning off rookie Max Kranick. The Pirates cut the lead in half by stringing together three straight singles — the last an RBI hit by All-Star Bryan Reynolds — in the third off another rookie right-hander, Tylor Megill.

Alonso, who won the 2019 Home Run Derby and will attempt to defend the crown at Coors Field on Monday night, smoked a line drive off the scoreboard in left field with two outs in the third. It was the 17th homer of the season but just the third at Citi Field for Alonso, who hit a three-run shot in a 13-4 win Friday night.

Jacob Stallings hit a long solo homer off Seth Lugo in the sixth to pull the Pirates within a run again, but Billy McKinney provided insurance in the bottom half with a pinch-hit RBI single.

Jeurys Familia (4-1) was credited with the win after he needed just one pitch to get the final out of the fourth. Edwin Diaz earned his 19th save by striking out the side on 10 pitches in the seventh.

Megill, making his fourth career start, allowed the one run on four hits and three walks while striking out seven over 3 2/3 innings.

Kranick (1-1), who threw five perfect innings in his big league debut against the St. Louis Cardinals on June 27, allowed three runs on four hits and three walks while striking out five over three innings.