Pat Valaika walked with the bases loaded with two out in the 10th inning to force in the go-ahead run and the visiting Baltimore Orioles came back to defeat the Toronto Blue Jays 6-5 at Buffalo to end a 20-game road losing streak.

The Orioles tied the game with four runs in the eighth and got the win in the 10th when Toronto reliever Trent Thornton (1-3) walked three batters. That forced home Trey Mancini who started the inning at second base.

Paul Fry (1-2) threw a perfect bottom of the ninth for Baltimore and Cole Sulser earned his second save despite walking Bo Bichette to start the bottom of the 10th with Marcus Semien at second. But Vladimir Guerrero Jr. grounded into a double play and Teoscar Hernandez struck out swinging.

George Springer and Guerrero hit solo home runs for the Blue Jays, who had their five-game winning streak end. The Orioles stopped a six-game losing streak.

Springer led off the second with his third homer of the season.

The Orioles ended a 26-inning runless string with one in the third. Pedro Severino reached second on a throwing error by shortstop Bichette. He took third on a single by Cedric Mullins and scored when Freddy Galvis grounded into a double play.

Guerrero hit his 25th homer of the season with two out in the bottom of the third.

Toronto scored once in the fourth. Randal Grichuk tripled with two out and came home on Lourdes Gurriel Jr.’s infield hit. 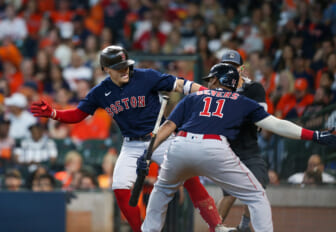 Toronto increased the lead to 5-1 on Semien’s two-run double against Dillon Tate in the seventh.

Tyler Chatwood walked the first two batters in the top of the eighth and allowed a one-out RBI single to Ryan Mountcastle. Tayler Saucedo came in and allowed an RBI single by pinch hitter Anthony Santander and a two-run double by Austin Hays that tied the game.