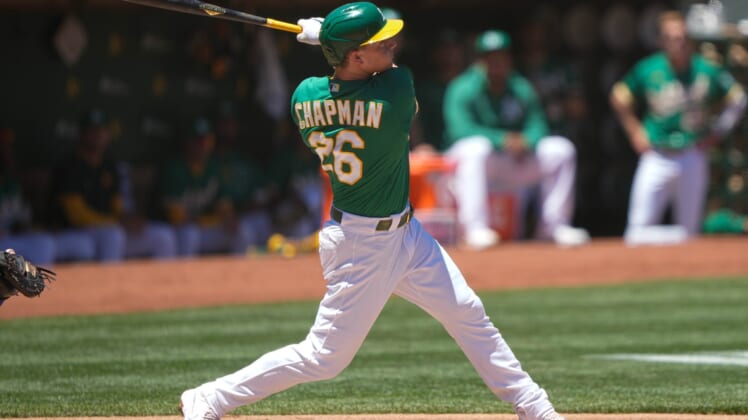 Matt Olson capped a powerful weekend with two home runs and right-hander Chris Bassitt won his seventh consecutive decision Sunday afternoon as the Oakland Athletics made it three straight wins over the visiting Kansas City Royals with a 6-3 victory.

Matt Chapman homered for the second straight day for the A’s, who dropped the series opener to the Royals 6-1 on Thursday before rebounding for 4-3, 11-2 and 6-3 triumphs.

The three wins completed a clean sweep of the Royals’ vaunted Class of 2018 pitching prospects, including left-hander Kris Bubic (1-2), who allowed five of Oakland’s six runs in 4 2/3 innings.

The A’s scored runs in four of the five innings Bubic started, including the first on Chapman’s seventh homer of the year, the third on Olson’s 17th and the fifth on Olson’s 18th. All three were solo shots.

The two-homer game was Olson’s second of the season and completed a weekend on which he went 6-for-9 with a double, three homers and six RBIs.

The A’s also scored twice in the second on an RBI double by Elvis Andrus and a run-scoring single by Mark Canha, and padded their total when Tony Kemp drew one of his three walks in the sixth and scored on a Canha double.

Bubic, a former San Jose prep standout and Stanford product who was making his first Bay Area major league start, was charged with five runs on seven hits in his 4 2/3 innings. He walked three and struck out five.

Bassitt (7-2), who lost his first two outings of the season, ran his streak of consecutive starts without another loss to 12 with 5 2/3 innings of five-hit, two-run ball. He also walked three and struck out five.

The Royals used solo homers by Andrew Benintendi, his eighth, and Carlos Santana, his 11th, to stay within arm’s reach before Jake Diekman and Lou Trivino combined to retire all six batters they faced in the eighth and ninth innings to preserve Oakland’s ninth win in 11 games in June.

Trivino, who struck out two, was credited with his 10th save.

Salvador Perez had a single and a double for the Royals, who completed a seven-game California swing with just one win.