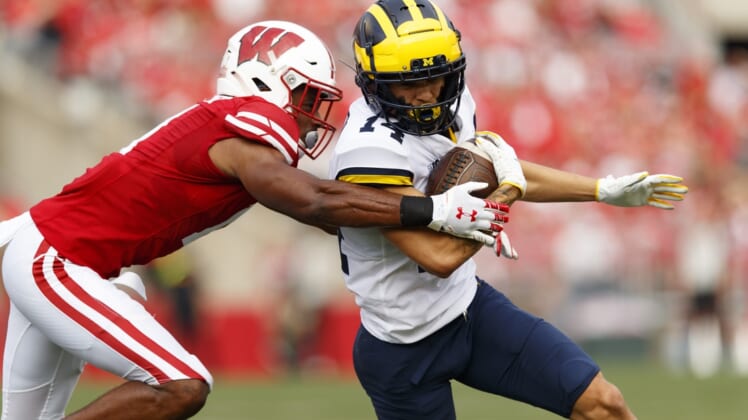 Cade McNamara passed for two touchdowns and No. 14 Michigan capitalized on turnovers for a 38-17 victory over host Wisconsin on Saturday in the Wolverines first victory at Madison since 2001.

The Wolverines (5-0, 2-0 Big Ten), playing on the road for the first time, pulled away from a 13-10 halftime lead. Michigan turned two fumble recoveries and an interception into 14 points.

McNamara had touchdown passes of 34 and 13 yards to Cornelius Johnson, and also hit Johnson with a two-point conversion. J.J. McCarthy ran for one score and passed 56 yards for Michigan’s touchdown.

Wisconsin quarterback Graham Mertz left after being sacked on the first series of the second half and did not return. Starting tight end Jack Ferguson also left with an injury.

The Wolverines, who had lost five straight at Wisconsin, opened a 20-10 lead with a 59-yard drive on their first possession of the second half. McCarthy plunged over from a yard out on fourth down.

Michigan turned a fumble by backup quarterback Chase Wolf into a 48-yard field goal by Jake Moody for a 23-10 lead with 12:21 remaining. Daxton Hill intercepted Wolf on the first play of the ensuing series at the Wisconsin 35, setting up McNamara’s 18-yard touchdown pass to Johnson.

Wolf threw a 25-yard touchdown pass in the closing minute. 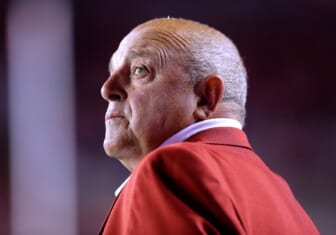 Michigan passed for 253 yards, but also rushed for 112 yards on 44 attempts, against Wisconsin’s top-ranked run defense, which entered allowing 23 yards per game on the ground.

After Moody’s 47-yard field goal put Michigan up 13-3, Wisconsin took over on its own 37 with 25 seconds left in the half. After a 9-yard run, Mertz hit Chimere Dike for 36 yards and then on an 18-yard touchdown pass.

Michigan took a 7-0 lead late in the first quarter when McNamara capped a 59-touchdown drive with a 34-yard pass to Johnson.