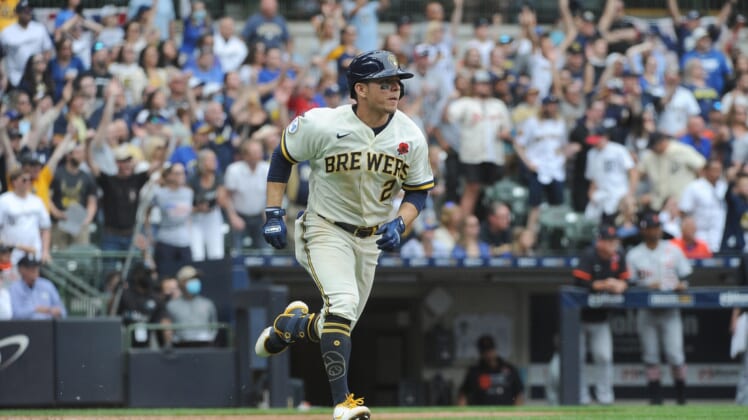 Luis Urias hit a game-winning single in the bottom of the 10th as the Milwaukee Brewers stretched their winning streak to five games by edging the visiting Detroit Tigers 3-2 on Monday.

Willy Adames hit a two-run homer for Milwaukee, and Brad Boxberger (2-1) picked up the victory with a scoreless inning of relief.

Akil Baddoo hit his fifth homer of the season for Detroit, and Jonathan Schoop added two hits and an RBI.

Detroit turned the game into a bullpen day. Starter Tyler Alexander was lifted for a pinch hitter after just one inning of work.

The Tigers loaded the bases with one out in the second but failed to score. Burnes struck out Jake Rogers and retired pinch hitter Nomar Mazara on a grounder to end the threat.

The Brewers had two runners in the bottom of the inning but a double play got the Tigers out of that jam.

Detroit broke through with a run in the sixth. Harold Castro and Jeimer Candelario led off the inning with singles. Miguel Cabrera bounced into a double play but Schoop, who nearly homered in the at-bat, ripped a single to knock in Castro.

Milwaukee moved ahead 2-1 in the bottom of the inning. Pinch hitter Daniel Robertson walked and, after a fielder’s choice, Adames homered to right off Daniel Norris. It was Adames’ seventh homer this season.

With Trevor Richards on the mound, Baddoo tied the game in the seventh with a leadoff homer.

In the top of the 10th, pinch hitter Willi Castro executed a sacrifice bunt to move the runner, Rogers, to third. But Boxberger struck out Robbie Grossman and Harold Castro to leave the runner stranded.