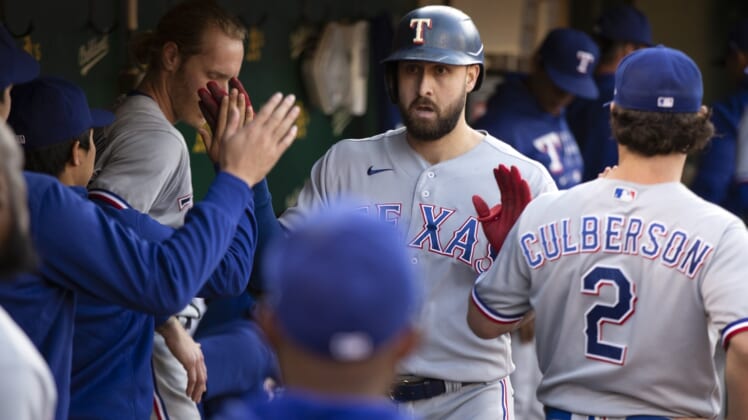 Joey Gallo continued his home run tear with bombs to right and left field Tuesday night, a pair of solo shots that lifted the visiting Texas Rangers to a 5-4 victory over the Oakland Athletics in the opener of a three-game series.

Right-hander Mike Foltynewicz (2-7) got the better of James Kaprielian (4-2) in what — for the most part — was a pitchers’ duel as the Rangers won a fourth straight game for the first time this season.

Gallo’s homers came in the fourth and sixth innings and were his 17th and 18th of the season. Both came off Kaprielian.

The fourth-inning shot tied the score at 1-1, while his sixth-inning blast gave the Rangers the lead for good at 3-2.

Gallo now has five homers in his last three games.

In between Tuesday’s shots, Texas scored on a single by Eli White and an RBI double by Jonah Heim in the fifth.

Unbeaten in his previous three starts, Kaprielian was pulled after six innings, charged with three runs on six hits. He struck out six and did not issue a walk.

The A’s led twice, initially when Matt Chapman hit Foltynewicz’s sixth pitch of the game for a solo homer and then 2-1 in the fourth after an RBI double by Ramon Laureano.

Chapman’s homer was his 11th of the season.

Foltynewicz, who had a no-hitter broken up with no outs in the ninth inning in his only previous start in Oakland, went seven innings, allowing two runs and four hits. He walked one and struck out six in his first win since April 27.

Joely Rodriguez protected a 3-2 lead with a scoreless eighth that included two strikeouts before the Rangers added a pair of difference-making insurance runs on Nick Solak’s ninth homer of the season. The blow also scored Heim, who had singled.

Turns out Texas needed the additional scoring after Jed Lowrie and Mitch Moreland hit solo homers, their seventh and sixth, respectively, off Rangers closer Ian Kennedy in the last of the ninth. But Kennedy got Chad Pinder to pop up with the potential tying run on the bases for his 14th save.

Gallo, Heim and Solak had two hits apiece for the Rangers, who split a four-game home series with the A’s last week.