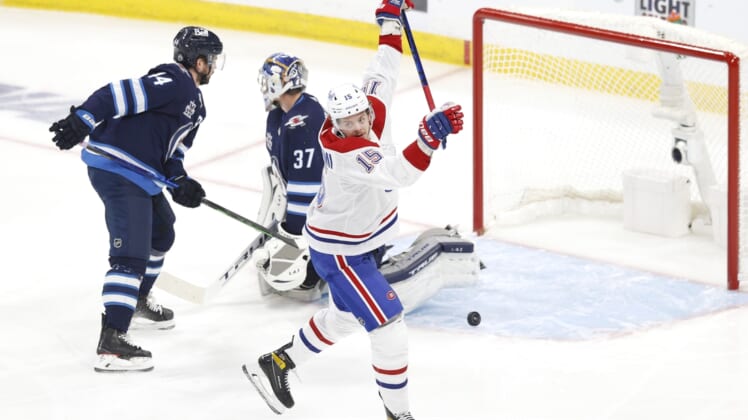 First-period goals by Jesperi Kotkaniemi, Eric Staal and Nick Suzuki sent the visiting Montreal Canadiens off and running to a 5-3 victory over the Winnipeg Jets on Wednesday to open their second-round playoff series.

Brendan Gallagher and Jake Evans also scored for the Canadiens, while goaltender Carey Price made 27 saves.

Adam Lowry, Derek Forbort and Kyle Connor replied for the Jets, who received a 28-save outing from goalie Connor Hellebuyck.

Game 2 of the best-of-seven Stanley Cup playoff series will be Friday in Winnipeg.

Having a quick turnaround after their seven-game series victory over the Toronto Maple Leafs, the Canadiens received a much-desired quick start when Kotkaniemi opened the scoring at the 3:30 mark by redirecting Jeff Petry’s point shot for his fourth goal of the playoffs.

Staal’s first goal of the playoffs doubled the lead 100 seconds later. The veteran created separation while at the doorstep and redirected Corey Perry’s pass.

Lowry put the Jets on the board when he slipped a backhand shot into the net while on a short-handed breakaway past the midway point of the opening frame, but Suzuki’s goal with 2:46 remaining in the frame restored Montreal’s two-goal edge. While on a two-on-one rush, Suzuki faked the pass before eluding a diving defender and then deked Hellebuyck for the highlight-reel tally.

Forbort made it a one-goal game with 10:38 remaining in regulation, but Gallagher made it a 4-2 count 102 seconds later when he tucked home a loose puck after Shea Weber was denied on a breakaway during a power play.

Connor’s one-timer from the bottom of the right circle again brought the Jets within one with 1:42 remaining in regulation, but Evans notched an empty-net goal with 56.9 seconds left.

As he scored, Evans — who celebrated his 25th birthday on Wednesday — took a high hit from Mark Scheifele and was taken off the ice via stretcher after appearing to be knocked unconscious. Scheifele was assessed a five-minute major penalty for charging and a game misconduct.

The Jets also suffered an injury. Not only did veteran center Paul Stastny not play due to injury, but defenseman Dylan DeMelo left the game early in the first period.