Kaye’s goal on an electric header in the 71st minute broke a 1-1 tie as Colorado improved to 4-0-1 over its last five matches. Kaye was acquired from Los Angeles FC late last month.

Diego Rubin also scored for the Rapids (11-4-4, 37 points), who rallied with two goals over a seven-minute stretch of the second half.

Salt Lake had a 17-14 edge in shots with both teams putting six on target.

He spotted Kaye moving toward the net and drilled a left-footed cross in his direction. Kaye reached the ball on the run and headed it past MacMath.

Salt Lake’s Aaron Herrera set up the game’s first goal in the 51st minute with a sharp centering pass. Rusnak was able to time it and delivered a hard right-footed blast into the net for his fifth goal of the campaign.

The Rapids knotted the score in the 64th minute as Jack Price took a corner kick and sent the cross toward the net. The ball carried toward Rubio, who sent a header that one-hopped into the right corner of the goal for his fourth tally of the season.

Salt Lake appeared to score a goal in the 34th minute but it was overturned two minutes later after a video review found that Justen Glad was offside. 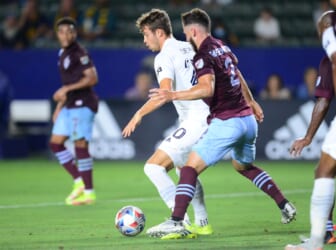 Rusnak sent a direct kick toward the net and Glad got his leg on the ball and sent it toward the net. Yarbrough made the save but Rubio Rubin was there for the rebound and tapped it into the net.

Kaye sent a booming left-footer on goal in the 29th minute but MacMath made the save.