Andre Shinyashiki scored a 73rd-minute goal, one minute after he came on as a substitute, and lifted the Colorado Rapids to a 2-1 win over the Los Angeles Galaxy on Tuesday night in Carson, Calif.

Shinyashiki nudged a header into the net off a corner kick that first came to the Rapids’ Cole Bassett, who headed the ball up toward the far corner of the 6-yard box. Shinyashiki was waiting, and he scored his fourth goal of the season.

The Galaxy never mounted much of an attack after that.

The Rapids (10-4-4, 34 points) have been one of the surprise teams in Major League Soccer this season. Colorado is on a four-match unbeaten streak, 3-0-1, and continued its success with set pieces turning into goals.

Colorado’s first goal came as the result of a foul in the box on the Galaxy’s Rayan Raveloson. The infraction originally was not called, but the ruling was changed to a penalty shot after a video review. Jonathan Lewis put the ball high into the back of the net in the 13th minute for a 1-0 Rapids lead.

The Galaxy (11-7-2, 35 points) tied it in the 34th minute, Raveloson making up for his earlier miscue. He blasted a ball that came to him after being volleyed around inside the 18-yard box, burying the shot from 20 yards out.

The Madagascar native has five goals in his last nine matches.

Los Angeles got close to taking a lead, but Colorado goalie William Yarbrough came up with an athletic save in the 50th minutes. Later, Bassett hit the bar with a line drive of a shot, and in the 62nd minute, the Galaxy’s Samuel Grandsir rolled a shot off the goalpost.

The Rapids moved one point out behind the third-place Galaxy in MLS’ Western Conference standings while ending Los Angeles’ four-game unbeaten streak (3-0-1). 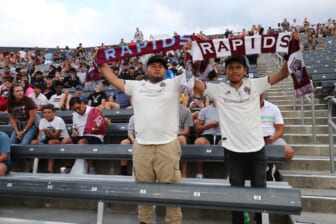