Two second-half goals gave Club America a 2-0 win over the Philadelphia Union on Wednesday in Chester, Pa., and the Mexican side advanced to the final of the CONCACAF Champions League with a 4-0 aggregate victory.

Nicolas Benedetti broke the deadlock in the 79 minute, and Henry Martin sealed the outcome in the third minute of second-half stoppage time.

America will oppose a fellow Liga MX team in the championship match. The second semifinal will conclude Thursday, with CF Monterrey taking a 1-0 lead into a matchup with Cruz Azul in Mexico City.

The first goal Wednesday came with America completing a sweeping team move on a counterattack. Benedetti’s shot was deflected into the net off a Union defender.

Martin added a tap-in goal in the final moments.

Philadelphia had a chance to score the opening goal of the contest, but America goalie Guillermo Ochoa saved Jamiro Monteiro’s penalty kick in the 50th minute.

A Mexican team will claim the regional club championship for the 16th consecutive year. No Major League Soccer team has won the CONCACAF Champions League since the Los Angeles Galaxy captured the title in 2000. 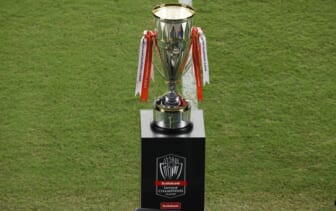