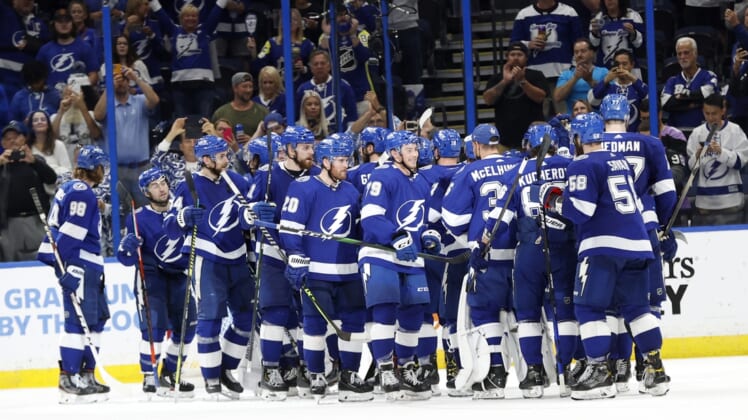 May 26, 2021; Tampa, Florida, USA;Tampa Bay Lightning right wing Barclay Goodrow (19) and teammates celebrate as they beat the Florida Panthers during game six of the first round of the 2021 Stanley Cup Playoffs at Amalie Arena. Mandatory Credit: Kim Klement-USA TODAY Sports

Barclay Goodrow, in just his second appearance of the postseason, scored with 7:21 remaining to break a tie as the Tampa Bay Lightning topped the Carolina Hurricanes 2-1 in Game 1 of their second-round series Sunday in Raleigh, N.C.

This was the first postseason meeting between the franchises. Game 2 of the best-of-seven series comes Tuesday night in Raleigh.

Brayden Point opened the scoring with a second-period power-play goal for the Lightning.

Jake Bean scored on a power play early in the third period for the Hurricanes, who had won all three home games in the first round against the Nashville Predators.

The Lightning withstood a frantic span in the last minute when the Hurricanes pulled Nedeljkovic and a Tampa Bay player lost his stick. 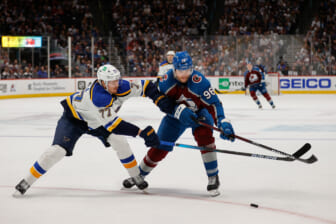 Goodrow, a center who had been injured entering the postseason, converted on a short-side shot. Blake Coleman picked up an assist on the go-ahead goal.

Tampa Bay’s Nikita Kucherov, who set a franchise record for a playoff series with 11 points in the first round, notched an assist on the game’s first goal.

Vasilevskiy was aiming for a second consecutive shutout after blanking the Florida Panthers in the first-round, Game 6 clincher last week. Bean, a rookie defenseman, disrupted those plans with a goal just 1:41 into the third period near the end of a power play that began late in the second period.

Coach Jon Cooper was behind the bench for his 100th playoff game as the Lightning’s coach (59-41).

More than 16,000 fans were on hand after PNC Arena capacity was raised based on a decision late last week.

Winger Cedric Paquette was in the Carolina lineup for the first time in the postseason after making his way back from an injury in the regular season.

Both teams were 4-3-1 across eight meetings in the regular season.