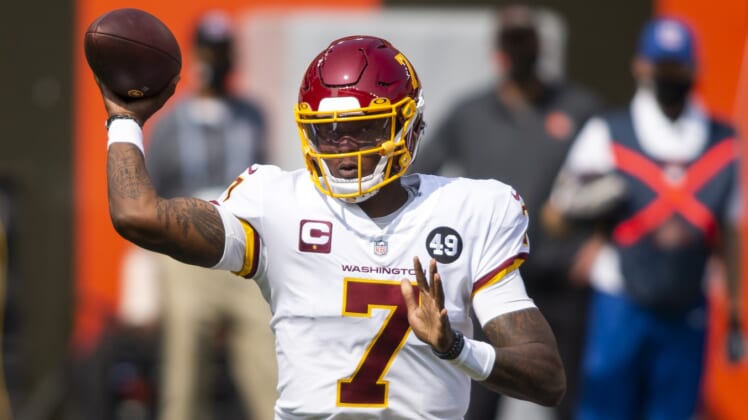 Fans were left frustrated after the Washington Football Team’s Week 3 matchup versus the Cleveland Browns. For many, it was a game with a lot of negatives in a crushing loss. While this may be true, but there are positives to be taken out of their Week 3 performance.

Here are seven positives and negatives from Washington’s Week 3 game versus the Browns.

A lot of the coverage surrounding Washington’s offense is on Dwayne Haskins and Terry McLaurin and rightfully so. The attention on Haskins and McLaurin allows other players on the offense to break out.

Inman only had three catches, but two of them went for touchdowns. One of his scores was a 17-yard connection, where he made a leaping catch and held on through contact. He did receive an unsportsmanlike penalty after his touchdown, but nevertheless, made a huge play.

His other touchdown was an 11-yard snag, which gave Washington the lead in the third quarter. His performance on Sunday versus the Browns is something fans can get excited about.

For many watching the game, this was the most frustrating part of Washington’s performance. Just as the offense seemed to find momentum, it would all come crashing down with a costly giveaway.

Washington had five turnovers versus the Browns, three interceptions and two lost fumbles. This proved to be demoralizing for the young team and neutralized the chances of winning in Week 3.

Haskins’ three interceptions had fans scratching their heads, confused about what he was looking at. Haskin also had a fumble, adding ao a troubling trend with his turnovers. Set to face the Baltimore Ravens, these issues could be magnified in Week 4.

One of the biggest positive from Week 3 for Washington Sweat’s dominance against PFF’s third-ranked offensive line. The second-year pass rusher out of Mississippi State practically lived in Cleveland’s backfield on Sunday afternoon, recording one sack and 2.5 tackles for loss.

Sweat’s progress is encouraging for Washington, especially since Chase Young went down with a groin injury. His speed as a pass rusher will prove to be vital as they face one of the most electric offensive players in the NFL in Week 4, Lamar Jackson.

Negative Two: Dwayne Haskins had the worst game in his NFL career

The calls for the benching of Haskins were loud after his porous Week 3 performance. Haskins had three interceptions, but even more concerning is the manner in which he threw the picks.

Haskins’ first interception was in the second quarter, where he overthrew his receiver down the middle. It allowed Browns’ safety Karl Joseph to grab it, taking it inside Washington’s 30-yard line.

On his second interception, Haskins’ mistake came on third down with under two minutes remaining in the half. He stared down Inman and launched it into double coverage, resulting in another turnover.

Haskins’ third interception was the worst of them all. It was third-and-long, with Washington trailing by four in the final quarter. He badly underthrew Inman, with the pass appearing like it was thrown directly to the linebacker.

The No. 2 overall pick went down with a groin injury that made Washington fans’ hearts drop. Young, who avoided a long-term injury, still made his presence felt in Week 3 without his pads on.

He motivated his teammates, especially Haskins. In years past, Washington struggled to find leadership from their star players. They seem to have found that missing presence in a rookie, who is already turning out to be a star.

There have been mixed feelings about offensive coordinator Scott Turner. His play-calling has been stagnant through the first two weeks, but he showed creativity against the Browns. Washington ran some reverse end-around, and the play-calling seemed to be more versatile.

However, it was not creative enough. Washington does not have the playmakers nor the offensive line to just sit back and throw the ball. Haskins has shown he needs more assistance. Turner needs to rely more on the running game, so it can get Haskins out of the pocket on play-action passes.

This will allow for his confidence to come back and for Washington to move the chains. He also must find ways to get the ball to his star players more often. Turner needs to fix the game plan so he can protect his young quarterback.

Positive Four: Converting on third down

Washington’s offense rarely converted on third downs in 2019 and the issues continued early this season. It converted 5-of-18 third downs versus the Eagles in Week 1, but escaped with a victory. Against the Arizona Cardinals, Washington converted just 25% of its third-down attempts.

The tide seemed to turn Week 3. Washington’s offense converted 5-of-11 third downs, a promising sign for improvement. Converting on third downs can determine the outcome of a game and Washington is starting to turn things around.

Earlier in the article, Turner’s play-calling was highlighted as an area of concern. One reason for this is his inability to get the ball to McLaurin. McLaurin only had four catches for 83 yards versus the Browns, not remotely enough for a star talent.

Turner needs to find a way to get McLaurin more targets, especially in open space.. Washington’s offense lacks playmakers and McLaurin is one of the most underrated receivers in the NFL. Turner needs to use McLaurin like the Giants used Odell Beckham Jr, feed him the ball every chance they get.

For a young team, improvement is key. They are improving in certain categories and this improvement can make a difference as long as it continues.. If Washington can get the lead quickly, their defense can protect it, which should lead to more wins.

Negative Five: The inability to protect a lead

As of right now, Washington can’t stay ahead. It had several opportunities to run away with the game in Week 3, but the offense prevented it. The defense wasn’t amazing by any means, but held its own when the offense was plagued by turnovers. Scoring early and often will be the next step Washington must take to win games.

Washington only had nine more total yards than the Browns, but this is still impressive for a team that turned the ball over five times. Washington had 309 total yards on offense, an encouraging sign for Ron Rivera’s team.

In a game where everything seemed to go wrong, a stat like this helps to put everything into perspective. Rivera understands he is leading a young team, and this also helps to show improvement each week.

Rivera has made it clear he is more worried about how the team progresses rather than the results of the game. This was evident versus the Browns, when he didn’t seem to pursue a comeback after trailing by two touchdowns.

Rivera’s logic is sound, but at some point, his team needs to learn how to win games. Progress can only take you so far, and the team has to learn how to come back from big deficits in order to become a successful franchise.

Despite the turnovers and poor play-calling, Washington seemed to find its groove when it protected the ball in Week 4. There were moments when Washington moved the ball downfield with ease. However, turnovers would crush any groove they found.

It sounds repetitive, but it is the truth, the turnover woes need to be corrected. Washington must be more creative with play-calling, clean up the mistakes and execute. Once that happens, this offense will look significantly better.

Washington’s front seven is the strength of the entire team. However, they did not show that Week 3. They faced a tall task playing Nick Chubb and Kareem Hunt, but it still should not be an excuse. Hunt and Chubb ran with ease and seemed to get whatever they wanted.

This opened up the passing game for Baker Mayfield. Washington will face an even bigger task Week 4 versus the Ravens, and by the looks of the recent loss, it will be another long day for Washington.