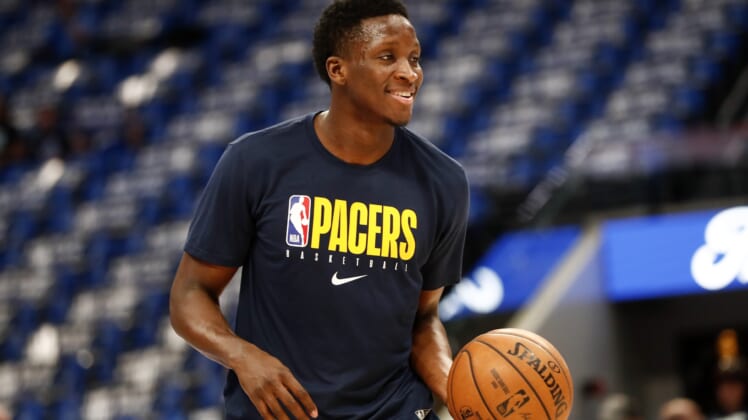 Indiana Pacers All-Star guard Victor Oladipo claims he doesn’t want to be traded, but his alleged words to players from other teams on the court in the Orlando bubble suggest otherwise.

Oladipo said when asked if he’d ever demanded a trade from Indiana, per ESPN.com’s Eric Woodyard, “I never have. I never came out and said that I didn’t want to play for the Pacers or be in this organization but, yeah, I’m focused on now. Here and now.”

What about this? We’re going to go with hearsay over the horse’s mouth in this instance and speculate on the five top destinations for Oladipo to wind up being traded to. Spoiler alert: Those landing spots include the three Oladipo allegedly gave a public endorsement to!

We’re going off deals that were successful between Oladipo’s prospective suitors and the Pacers through ESPN’s NBA trade machine for the sake of simplicity. These are hypothetical scenarios after all. If there are minor discrepancies in the validity of transactions after this is published, it’s easier to fill in the blanks by imagining a third team joins in, plays ball, and makes the Oladipo trade work.

Victor Oladipo trade: A question of now or later?

ESPN insider Zach Lowe reported in November that “teams are monitoring the Oladipo situation, but several of them would like to see Oladipo in action before engaging Indiana” in trade talks. This is tantalizing stuff. It seems to suggest that Oladipo, who’s entering a contract year in 2020-21, is likely to be dealt, and it’s not a question of “if” but rather “when.”

Without further ado, how about some fun fodder to fuel the fire of Oladipo trade rumors? If the 28-year-old can return to his 2017-18 form, when he averaged 23.1 points, 5.2 rebounds, 4.3 assists and 2.4 steals per game, well, Oladipo will be a steal for any of these teams.

Other than R.J. Barrett and the just-drafted Obi Toppin, almost everyone on the Knicks’ roster should be on the table if there’s a chance to land an All-Star player, something New York hasn’t seen in years. Although Oladipo may have question marks surrounding him, if he weren’t to work out at Madison Square Garden, he could always take his talents elsewhere in 2021.

The basketball fit here is strong. Oladipo provides a lead guard the likes of which the Knicks haven’t had since Linsanity took the city by storm, and of course that didn’t last. Nothing good seems to with this franchise, only now they seem to finally have a competent front office in place who could pull off a deal like this and rectify some prior regimes’ mistakes.

Knox is an unmitigated lottery draft bust despite only entering his third season, and Smith is a supreme athlete but isn’t enough of a perimeter scoring threat to really keep up at the position in the modern NBA. He’s a better fit with Malcolm Brogdon as a member of the Pacers. Frank Ntilikina is worth keeping for now as New York’s perimeter defensive specialist off the bench, and sending a 2022 pick with protections ensures another shot at a marquee player in next year’s draft.

An Oladipo-Knicks experiment would be a lot of fun. He’d be given pretty much free rein in the offense, creating a dynamic, very intriguing backcourt combination with Barrett. In today’s NBA, you simply must do better than Elfrid Payton, Smith and Ntilikina as your top point guard options, Austin Rivers notwithstanding.

New Knicks coach Tom Thibodeau isn’t interested in a rebuild, and needs a hard-nosed cornerstone player to set the tone in his maiden campaign in the Big Apple. Oladipo seems to possess the requisite grit and grace to fit the Broadway Playbill.

Philadelphia fans are reasonable and measured in their reactions. This is sure not to be polarizing at all.

New 76ers general manager Daryl Morey must see Simmons’ value as a defender, yet with Joel Embiid able to protect the rim, the priority needs to be building out the depth of this roster. Simmons is a liability as a perimeter shooter, which doesn’t jibe with how Morey builds a team. Plus, Embiid and Simmons aren’t stringing together consistent winning seasons and can’t get over the hump in the postseason.

This may wind up being a three- or four-team blockbuster trade in which the Pacers and Sixers land more assets. As it stands, it’s a decent move for both sides. How else is Indiana ever going to get the type of star power Simmons brings to a franchise if not through a massive trade like this? They can’t lure free agents, that’s for sure. Simmons would be a strong fit alongside Domantas Sabonis and elevate the rest of the players in the Pacers’ rotation in a way Oladipo can’t.

Oladipo is a stout perimeter defender and a savvy distributor, if not quite the gifted passer Simmons is. However, he’s capable of creating his own shot, as is the versatile scorer Warren, who was a breakout star in the Orlando bubble and could benefit from a veteran coach in Doc Rivers to unlock his full potential.

That draft pick may require some slight additional maneuvering for this trade to be validated, yet everything makes sense across the board. Powell carried 49.5/39.9/84.3 shooting splits last season and unlike Oladipo, doesn’t have an expiring contract and lacks lead guard tendencies. This makes him an ideal fit alongside Brogdon, and gives him a chance to start full-time in Indiana.

Kicking in a couple other assets on one-year deals who the Pacers can flip is a courtesy for the Raptors, who may need a third team involved for Oladipo’s squad to get the proper return value. In any event, with Kyle Lowry entering free agency in 2021 and the final phase of his career, Toronto must be in go-for-broke mode.

After winning a championship in 2019 and following that up with a seven-game effort in the conference semifinals, it’s clear there’s a strong Raptors core in place to compete for a title even without Kawhi Leonard. Their missing piece to go the distance could definitely be Oladipo. His presence would ease Fred VanVleet to a super-sub bench role, where the latter would face less pressure to live up to the massive open-market contract he just signed.

Plus, VanVleet isn’t the most athletically gifted player, and with Lowry continuing to age, a healthy Oladipo provides juice as a versatile defender who can take the pressure off Toronto’s incumbent backcourt on that end of the floor.

Oladipo should take a “can’t beat them, join them” approach toward taking his talents to South Beach. In the first round of the NBA playoffs, Indiana got swept by Miami. Yes, Domantis Sabonis wasn’t in action for the Pacers, but would it really have made much difference? Would Sabonis’ presence sparked a run through the rest of the East? Probably not.

Regarding the Heat’s side of the trade, the reigning Eastern Conference champions seldom used Olynyk in the NBA Finals, and Iguodala served his purpose as a vet with championship pedigree on a young 2019-20 Heat squad. But the team grew up quickly, has multiple excellent young pieces to build around, and can sacrifice some draft assets and expiring contracts to go all-in for Oladipo.

Despite already picking up Avery Bradley during the offseason to bolster their perimeter platoon, Miami could stand to add firepower, experience and additional defense, all of which Oladipo provides. Goran Dragic, Tyler Herro, Duncan Robinson and Kendrick Nunn? Good for scoring, not so much on the defensive end.

In order for Indiana to build a legitimate contender, it needs some draft capital and some good fortune to maximize the value of those picks, unearthing diamonds in the rough just as the Heat did with Herro, the undrafted Robinson and Nunn, among others. The Pacers should unleash Brogdon, allow Sabonis to continue blossoming and retool with some extra draft capital and cap space to spend in the next two years of free agency.

The trade: Pistons send F Blake Griffin and a first-round pick to Pacers for Victor Oladipo and F/G Jeremy Lamb

It may not be necessary to toss an extra draft pick in there, but boy would this benefit both teams. Malcolm Brogdon would be able to assert himself as the primary ball-handler while having a capable passing big in Griffin to not only help him work off the ball, but also play pick-and-roll and dive to the rim.

This could honestly be like a Jamal Murray-Nikola Jokic pairing, except Griffin is way more athletic provided he’s healthy, and while Brogdon hasn’t shown quite the type of consistent explosiveness or ability to erupt on offense as Murray, he’s a superior defender who could really be unleashed with someone like Griffin alongside him.

As is the case with the imaginary Simmons trade, the Pacers will fill seats whenever fans are allowed again if they can land a box-office star like Griffin on their squad.

Oladipo could take over either guard spot in Detroit, but seems better suited to play the 2 alongside veteran Derrick Rose. A three-man rotation with rookie lottery pick Killian Hayes isn’t bad to try on for size for a season. Then, if Hayes lives up to his billing and winds up being the All-Star the Pistons are hoping for, building around him and Oladipo for the coming years is a lot easier than finding multiple perimeter players to create a foundation around Griffin.