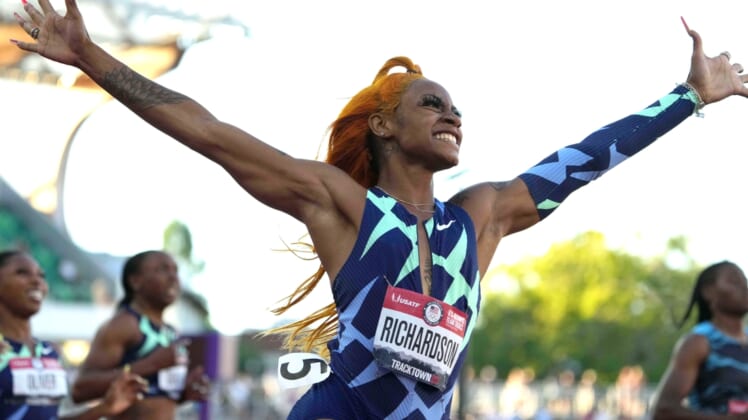 U.S. sprinter Sha’Carri Richardson accepted her one-month suspension Friday and apologized for a failed drug test due to marijuana use.

The 21-year-old tested positive at the Olympic trials last month in Eugene, Ore., where she won the 100 meters in 10.86 seconds to establish herself as a gold medal contender for the Tokyo Olympics.

Her ban runs through July 27, meaning she will miss the 100-meter race in Tokyo. However, she could still run in the relays.

Interviewed on NBC’s “Today” show, Richardson said she used marijuana to help her cope after finding about the death of her biological mother.

“People don’t understand what it’s like to have to… go in front of the world and put on a face and hide my pain,” Richardson said. “Who am I to tell you how to cope when you’re dealing with the pain or you’re dealing with a struggle that you haven’t experienced before or that you thought you never would have to deal with?”

Richardson said she knew she was breaking the rules.

“I know what I did and what I’m not supposed to do,” she said. “I know what I’m not allowed to do and I still made that decision. Not making an excuse or looking for any empathy … but being in that position of my life and finding out something like that … that definitely was a heavy topic.”

“The rules are clear, but this is heartbreaking on many levels; hopefully, her acceptance of responsibility and apology will be an important example to us all that we can successfully overcome our regrettable decisions, despite the costly consequences of this one to her,” USADA CEO Travis T. Tygart said in a release.

USA Track and Field has not yet finalized the relay teams.

“If I’m allowed to receive that blessing (compete in Tokyo) then I’m grateful for it,” Richardson said. “But if not, right now I’m just going to focus on myself.”

No matter what happens, Richardson said her Olympic dreams are not over.

“This is just one Games. I’m 21, I’m very young. … I have plenty of Games left in me to compete in and I have plenty of talent that backs me up, because everything I do comes from me naturally. No steroid, no anything,” she said. “This incident was about marijuana, so after my sanction is up I’ll be back and able to compete, and every single time I step on the track I’ll be ready for whatever anti-doping agency to come and get what it is that they need.”