Boxing heavyweight superstar Tyson Fury claims he would be interested in a clash with fellow Englishman Anthony Joshua, but only if the event is a completely free offering for fight fans.

Fury is at the absolute height of his popularity and still remains in his athletic prime at only 33 years old. He is unbeaten after 33 fights and just earned an impressive technical knockout over top contender Dillian Whyte in April, in front of 94,000 of his countrymen and women in London’s Wembley Arena.

Related: Ryan Garcia Next Fight: Who could face the undefeated star next?

Following his victory, “The Gypsy King” claimed he was done with the sport after seemingly overcoming many of the top challenges in the division, including going unbeaten in three fights against heavyweight crushing machine Deontay Wilder.

However, in the fight game retirements from a top star is always a proclamation that should be taken with some skepticism. And it seems Fury may already be walking back his plans.

On Wednesday, the undefeated great took to his Instagram account and told his near six million followers that he would be down for a clash with the other great English heavyweight of the generation, Joshua, but only if it was a booking with no fight purses, on free TV, and tickets at no cost.

“This is a reconfirmation of what I’ve said about fighting Anthony Joshua for f*** all in England,” Fury said. “That’s how the fight happens, I’ll sign the contract today. The fight’s got to be for free. Free-to-air television and all tickets go for free. No money is to be made out of this British historic fight if it happens. There’s the terms, I’m in the driving seat, take it or effing leave it. The ball is in your court, guys. Either way, I don’t give a damn.” 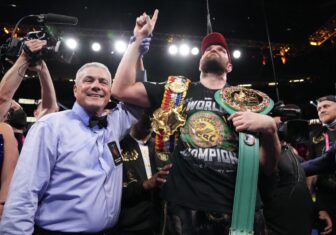 Joshua, 32, has not fought since a September loss to Oleksandr Usyk. The pair are set for a rematch on August 20. It was Joshua’s second loss in his last four fights and severely diminished the value of a booking with Fury. However, a win over Usyk could greatly improve the interest in a possible matchup.

Even if the value of a bout isn’t as high as it would have been three years ago, in England, a Fury vs Joshua fight will still be a massive event that will fill Wembley Arena to capacity — free or not.