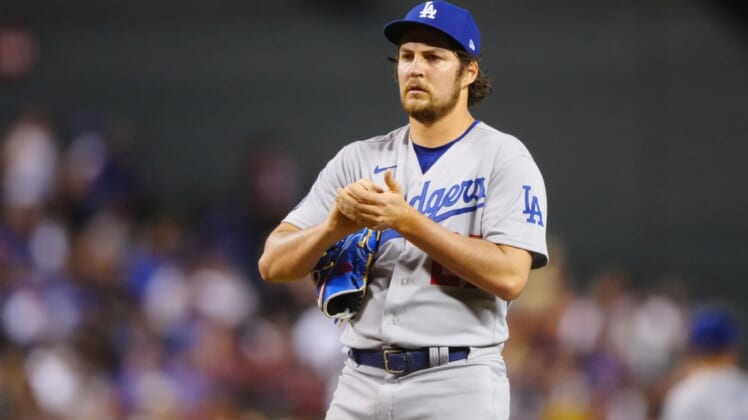 It was back on July 2 that Los Angeles Dodgers ace Trevor Bauer was placed on seven-day administrative leave by MLB after accusations of assault were levied in the star pitcher’s direction.

With the Pasadena Police Department in Southern California still investigating the allegations, it looks like Bauer won’t be returning to the bump any time soon.

MLB announced on Thursday that it has extended Bauer’s leave for another seven days starting on Friday. In his report of the news, ESPN’s Jeff Passan seems to conclude that a indefinite extension of the leave could be in the cards.

In announcing that Bauer had initially been played on administrative leave, MLB also noted that it is conducting an investigation into the allegations while working with authorities in California.

“MLB’s investigations into the allegations made against Trevor Bauer is ongoing. While no determination in the case has been made, we have made the decision to place Mr. Bauer on seven-day administrative leave effective immediately,” MLB announced. “MLB continues to collect information in our ongoing investigation concurrent with Pasadena Police Department’s active criminal investigation. We will comment further at the appropriate time.”

Since then, it’s been noted that MLB is looking to interview the accuser in the Trevor Bauer case. It’s not yet known when that will happen.

Bauer, 30, signed a three-year, $102 million contract with the defending champion Dodgers back in February. The 2020 NL Cy Young winner had made 17 starts while posting an 8-5 record and 2.59 ERA before being placed on leave.