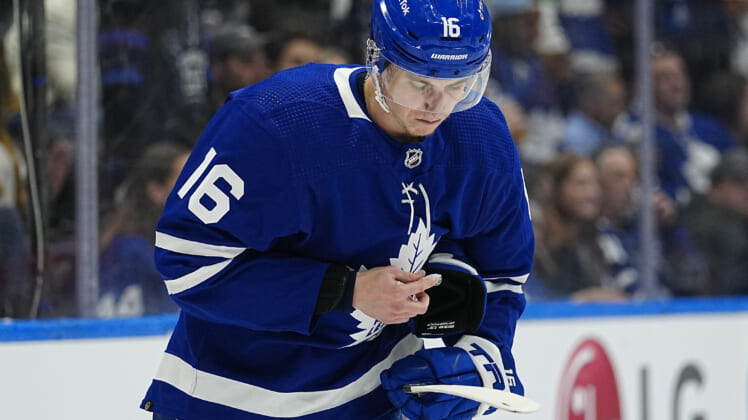 Toronto Maple Leafs star Mitch Marner was the victim of an apparent carjacking at gunpoint on Monday night.

The Toronto Sun reported on May 16 that Twitter reports from the Toronto Police Department of a car robbery in The Queensway section of downtown Toronto involved the 2020 NHL All-Star. The tweet from the TPD stated that at 7:46 PM EST, on the corner of The Queensway — a major street in the city — and Islington a man was robbed of a black Range Rover by three suspects. Two of the individuals had guns, with the third wielding a knife.

A source told the Sun that Marner was out with the goal of going to see a movie with a friend when”‘the guys approached wearing masks and said they wanted the vehicle. Mitch said, ‘go ahead and take it.”’ Police sources told the outlet that Marner was shaken up by the unfortunate occurrence but was unhurt.

The robbery comes just two days after the 25-year-old and his teammates were eliminated from the first round of the NHL Playoffs by the Tampa Bay Lightning. After six back and forth games, the Leafs fell to the Lightning at home in Game 7 by a score of 2-1.

Carjackings and muggings are on the rise in Toronto, and in many major cities in North America. The news outlet reached out to the Toronto Mayor John Tory for comment.

“My initial reaction is how dare someone do that to anyone in our city. Violence against any resident is unacceptable and I know Toronto Police work incredibly hard to bring those responsible to justice,” Tory said. “I’m thankful no one was physically injured in this incident, according to police. I know the police are working right now to arrest the suspects in this case and have been working non-stop to crack down on carjackings — a number of arrests were announced last week.”

Mitch Marner has played six seasons with Toronto Maple Leafs after being selected fourth overall in the 2015 NHL Draft. He has been one of the team’s best players in that time. Scoring just under 100 points in two seasons, including 97 this past season.