Top takeaways from first round of 2019 NFL Draft 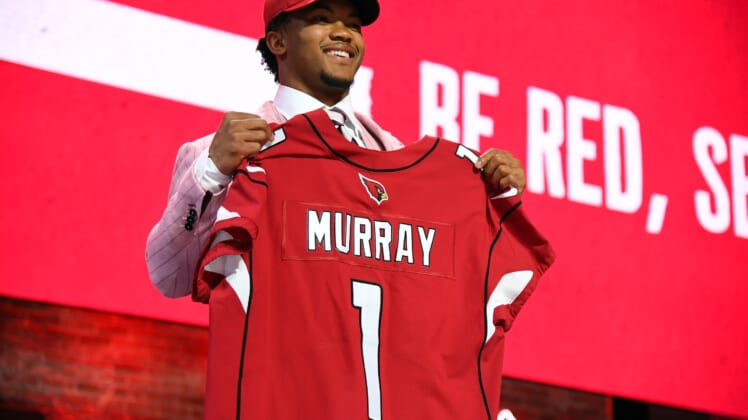 The first round of the 2019 NFL Draft offered us a ton of surprises. Did the New York Giants really take Daniel Jones with the sixth pick? Their division rivals in the NFC East, the Washington Redskins, seemed to hit a home run with fellow quarterback Dwayne Haskins at the midway point of Round 1.

Meanwhile, the Buffalo Bills and Oakland Raiders went in different directions a long the defensive line — one getting a true stud and the other reaching big time.

It seems like Arizona Cardinals general manager Steve Keim admitted his mistake from a year ago by taking Kyler Murray at one. And remaining in the NFC West, the San Francisco 49ers added the draft’s best player.

These are among the top takeaways from the first round of the 2019 NFL Draft.

We’re not going to sit back and say this is a bad thing. It isn’t. After signing former Patriots defensive end Trey Flowers to a massive contract last month, Patricia and the Lions went back to the well again on Thursday. The former Patriots assistant selected Iowa tight end T.J. Hockenson with the No. 8 overall pick in the draft. Hockenson was the consensus No. 1 tight end in the draft and is seen as a freak of nature.

It’s rather clear that Detroit is trying to provide Matthew Stafford with the same type of weapons we’ve seen Tom Brady excel with in New England. In this case, it’s almost a carbon copy of Rob Gronkowksi. It should do wonders for Stafford and Co.

Raiders’ drama seemed to be real

Jon Gruden and Co. were apparently looking to move up for either defensive tackle Quinnen Williams or edge rusher Nick Bosa. The target area was the San Francisco 49ers at No. 2 overall. Instead, Oakland stood pat with the fourth pick and selected Clemson edge rusher Clelin Ferrell.

While seen as a first-round prospect, Ferrell was nowhere near projected to go within the top-10, let alone the top-five. In fact, Oakland selected him over fellow pass rusher Josh Allen. It was a major reach at an area in the draft that teams must avoid reaches. It also lends credence to the idea that pre-draft drama in Oakland’s war room was real. Oakland then went running back Josh Jacobs with the second of its first-round picks before adding safety Johnathan Abram to close out Day 1. All three of these picks were reaches.

Bills get a real steal in Ed Oliver

After seeing Oakland reach with Ferrell and the New York Giants come out of left field with their selection of Daniel Jones, Buffalo was able to add an elite player at a need position. A dominant figure at Houston, Oliver came under scrutiny leading up the draft. In no way does this mean the defensive tackle isn’t an elite-level talent.

It really seems that teams analyzed Oliver’s game too much. He proved to be overwhelming for college competition. He could be an instant Pro Bowl performer. After rumors persisted that Buffalo might move into the top three for fellow defensive tackle Quinnen Williams, the team added a value pick a nine.

It was being reported in the lead up to the draft that Washington was potentially looking to trade up for Daniel Jones. In fact, there seemed to be some disagreement between members of the front office. Had owner Daniel Snyder taken over the big board? Apparently not. Standing pat at 15 overall, Washington was able to land the consensus No. 2 quarterback in the draft in the form of Ohio State’s Dwayne Haskins.

This represents a major coup for Washington, especially given the injury issues this team is facing in the quarterback room. The Skins didn’t have to move up for Haskins. Instead, they saw him fall right on to their lap. That’s just great for a much-maligned front office.

Most fans in Northern California were pleading for general manager John Lynch and Co. not to overthink this. Selecting No. 2 overall, San Francisco was in position to land the draft’s best overall player. Once the Cardinals picked Kyler Murray at one, this became a reality.

In the end, these 49ers nabbed Ohio State edge rusher Nick Bosa to team up with recently acquired Pro Bowler Dee Ford on the outside. Add in another Pro Bowler in that of DeForest Buckner at defensive tackle, and this front seven is absolutely stacked. That’s a good thing with Kyler Murray, Russell Wilson and Jared Goff in the NFC West.

Florida State edge rusher Brian Burns could very well be a dynamo at the next level. In no way does this mean that continuing to ignore pass protection in front of often-hobbled former NFL MVP Cam Newton is a recipe for success.

Alabama’s Jonah Williams was off the board when Carolina selected 16th overall. Even then, two other offensive tackles were selected almost immediately after the Panthers’ pick. It just make no real sense for Carolina to continue ignoring pass protection in front of Cam. It’s that simple.

We’re not sure what the Giants are doing

New York wasn’t interested in drafting a quarterback until it was. David Gettleman and Co. didn’t show much confidence in Dwayne Haskins or Kyler Murray before meeting with them. In the end, these Giants made the most eye-opening move of the first round in selecting Duke’s quarterback Daniel Jones No. 6 overall.

It even led to Haskins laughing in the green room. Jones is seen as a major project and likely won’t be ready to start for two more seasons. Then with the 17th pick — acquired in the Odell Beckham Jr. trade — New York went defensive tackle in the form of Dexter Lawrence. That’s one way to get help for Jones and reigning NFL Offensive Rookie of the Year Saquon Barkley on offense. Ouch!

Some curious moves from the Packers

Former Michigan standout pass rusher Rashan Gary didn’t seem to be need for Green Bay after the team added edge rushers Za’Darius Smith and Preston Smith in free agency. Add in injury concerns to Gary, and it was a surprise at No. 12 overall.

With their second pick of Day 1 — acquired in a trade with the Saints last year — the Packers picked up a fast rising safety in the form of Darnell Savage. This was also a curious move from general manager Brian Gutekunst an Co. It’s obviously too early to draw conclusions here. But the Packers went with two boom-or-bust prospects.

It sure looks like Steve Keim’s hold on the Cardinals’ job is not tenuous. As had long been speculated, Arizona took reigning Heisman winner Kyler Murray at No. 1 overall. This comes one calendar year after Arizona selected another quarterback, Josh Rosen, in the top 10.

Keim is apparently willing to do everything to help first-year head coach Kliff Kingsbury. With everything still unsettled in the desert, it looks like Keim did well to admit his mistake from a year ago. In a vacuum, that’s not a bad thing.