Well, that was exciting. Two weeks of build up for Sunday’s Super Bowl LII between the Philadelphia Eagles and New England Patriots, and the two teams did not let us down. From a first half full of trick plays to a second half filled with record-breaking performances, this Super Bowl will go down as one of the single greatest ever played.

In the end, Philadelphia pulled off one of the greatest upsets in Super Bowl history, besting New England by the score of 41-33. It didn’t come without Tom Brady putting up a Super Bowl record 505 passing yards. Meanwhile, both defenses struggles to do anything of substance with the two offenses combining for a single-game NFL record 1,151 total yards.

It was just a brilliant overall performance from so many different players and coaches in a game that will go down as one of the best ever. Here are our top takeaways from Philadelphia’s shocking win over New England in Super Bowl LII. 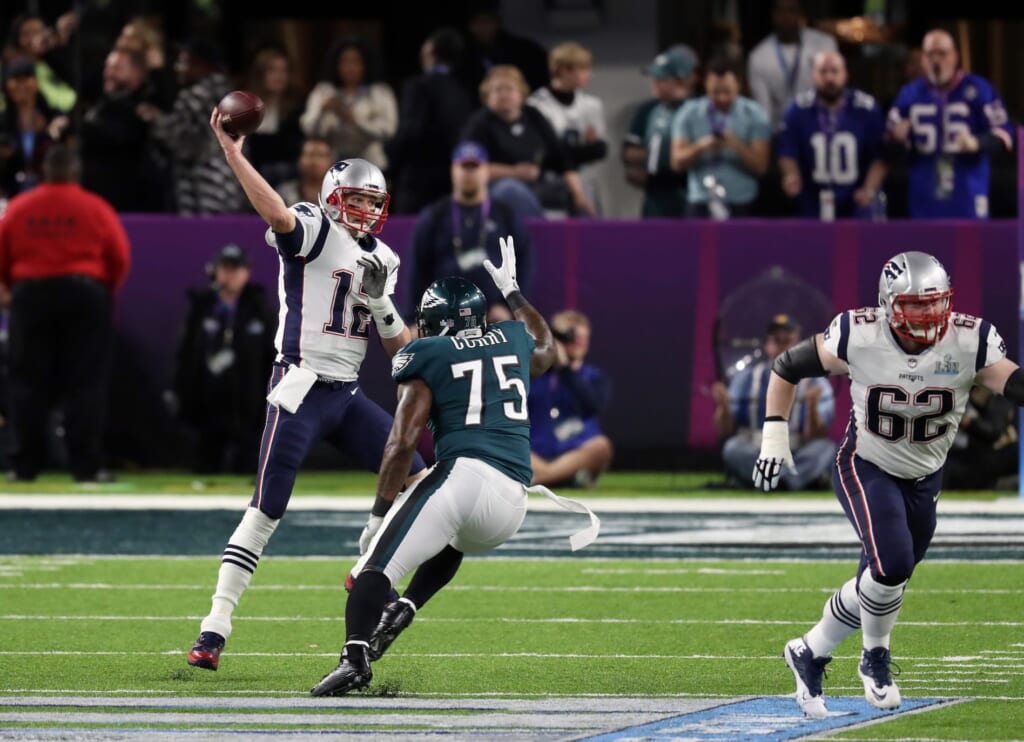 With two weeks to prepare for this game, it was readily apparent that Patriots offensive coordinator Josh McDaniels had a game plan scripted for the early part of Super Bowl LII. That came out in droves early Sunday night, with McDaniels taking advantage of the Eagles missing defensive player-caller Jordan Hicks for the game.

New England went with a hurry-up offense on its first possession, driving down the field 67 yards on eight plays before Philadelphia held the team to a field goal, tying the game up at three midway though the first. It would then get a field goal on the team’s second drive.

But after that, Eagles defensive coordinator Jim Schwartz got the clue. He changed up the scheme to send consistent pressure in the direction of the immobile Tom Brady. Sure it led to a few big plays as the remainder of the first half played out, but it also made Brady extremely uncomfortable in the pocket. That came to a culmination with New England needing to drive 90-plus yards in the final minute of the game to tie it up. Brady was under consistent pressure, ultimately leading to a failed Hail Mary attempt to Rob Gronkowski as time expired.

No issues with the National Anthem

Pink’s rendition of America’s anthem was absolutely glorious, as evidenced by the reactions she received on social media. It was made better by the fact that the music legend was dealing with the flu, overcoming it to put up a performance akin to what we heard from Whitney Houston over a quarter-century ago.

More than that, the anthem itself went off without an issue. Every single member of the Patriots and Eagles stood for the song. The military flyover outside of Minnesota’s U.S. Bank Stadium was beautiful. And the league paying homage to 16 Medal of Honor recipients brought patriotism out in a big way.

We all have political opinions. Players have a right to kneel. That’s a given. But it was great to see the tens of thousands in Minnesota show national unity at a time of major divisiveness in this nation. We think a common ground in that regard makes perfect sense. 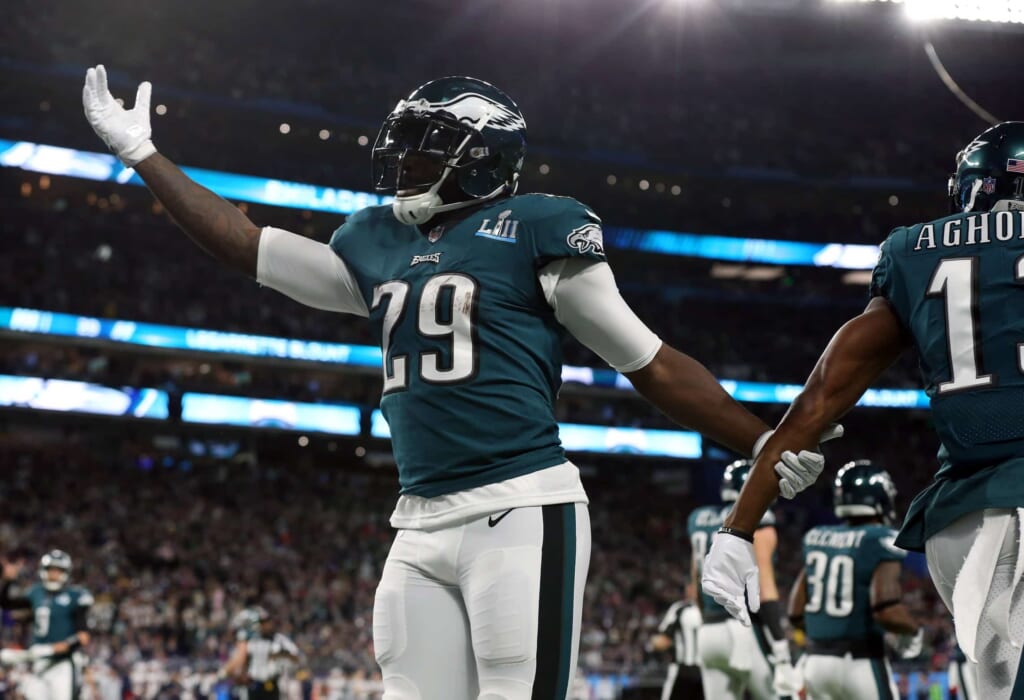 One of the focal points heading into the Super Bowl was a Patriots defense that yielded the second-most rushing yards per attempt during the regular season. Could former New England running back LeGarrette Blount take advantage of this, opening up Nick Foles and the passing game in the process?

We found out early Sunday evening in Minnesota. With the game tied at three after each team kicked field goals in their initial drives, Blount broke off a 36-yard run behind the right side of Philadelphia’s offensive line. That set the Eagles up at New England’s 34-yard one. One play later, Alshon Jeffery beat an over matched Eric Rowe for the game’s first touchdown.

Throughout the remainder of the game, it was readily apparent that Eagles head coach Doug Pederson had New England defensive coordinator Matt Patricia guessing. It led to 22 first half points and a double-digit lead heading into intermission. It also led to a 22-yard touchdown from Blount midway through the second to put Philadelphia up by 12 points. When all was said and done, Blount put up 90 yards on 14 attempts, giving his former team fits in the process. It was a great way to exact revenge after helping New England to the title last season.

Down 9-3 early in the second quarter, the Patriots had an opportunity to take the lead after Eagles kicker Jake Elliott missed a PAT. But for the second time in as many drives, Philadelphia kept New England out of the end zone. This time, it came after Brandin Cooks inexplicably attempted to leap Eagles safety Rodney McLeod on a short third-down opportunity.

Instead of going for it on fourth and short, Belichick and Co. decided to kick a chip-shot field goal to pull within three. That’s when long snapper Joe Cardona came up with a horrible snap, leading to Stephen Gostkowski missing a 26-yard field goal attempt. While Philadelphia ultimately went three-and-out on its next possession, this missed opportunity impacted the game in a huge way.

Where has this version of Nick Foles been for the better part of his career? We saw how well he can play in the NFC Championship Game against Minnesota, but the veteran took that to an entirely new level in Super Bowl LII on Sunday night. Less than two years removed from contemplating retirement, Foles went punch-for-punch with Tom Brady through four quarters of action. Not only that, he is the one that actually stepped up with everything on the line.

Down 33-32 late in the fourth quarter after New England took its first lead of the game, Foles led his Eagles on a ridiculous 14-play, 75-yard drive that culminated in a controversial 11-yard touchdown strike to tight end Zach Ertz. That drive saw Foles complete 8-of-10 passes as he surgically drove the ball down the field for the eventual game-winning touchdown. All said, Foles completed 28-of-43 passes for 373 yards with three touchdowns. He also added his first career receiving touchdown en route to earning the game’s MVP award. From backup and afterthought to joining the NFL’s greatest for one night. Foles was truly the story of Super Bowl LII. 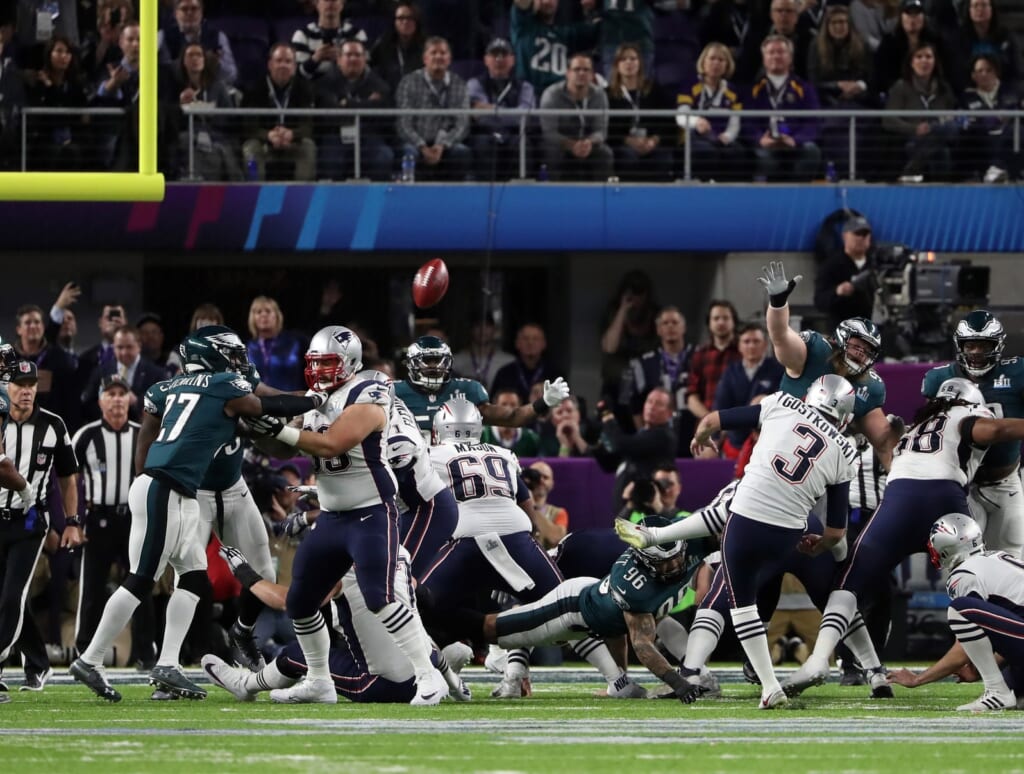 Two missed extra points and a missed field goal in the first half alone. All in the midst of a game that was ultimately decided by eight points. Talk about special teams letting both down in a big way. As a result of the first half miscues, the Patriots left four points on the board. Philadelphia came away with three fewer points than it should have scored.

We normally don’t focus on special teams in the lead up to a game of this ilk. We most definitely don’t talk about long snappers. But the bad snap by Joe Cardona on the above-mentioned Stephen Gostkowski miss hurt New England in an absolute huge way here.

Doug Pederson with the call of the century

With the Eagles up by just three late in the second quarter, Pederson showed that he has major cojones. Facing a fourth-and-goal from the one-yard line, not only did Philadelphia decide to go for it. That was ballsy in and of itself. No, they actually decided to have backup tight end Trey Burton pass the ball to quarterback Nick Foles (watch it in all of its glory here).

Unlike the Patriots’ trick play earlier in the game, one that Tom Brady dropped, the Eagles converted here. It gave the team a 10-point lead heading into the half. And it might go down as the single greatest call in Super Bowl history. Of course, that’s Monday morning quarterbacking at its best. If this play had failed, Pederson and the Eagles would have headed to the locker room with their tails between their legs. And the game might have been forever changed. It didn’t. And the end result was a brilliant outcome for Philly.

Speaking of Doug Pederson, the Eagles’ head coach had Patriots defensive coordinator Matt Patricia guessing throughout the game. The play-calling was nothing short of legendary. Whether it was calling for wheel routes on third-and short or going with the run-pass option, Pederson was on top of his game in a big way. In fact, he made Patricia, the soon-to-be Detroit Lions head coach, look incredibly bad in this one.

The same can be said for future Indianapolis Colts head coach Josh McDaniels. With help from Tom Brady, McDaniels called an absolutely brilliant game against Eagles defensive coordinator Jim Schwartz. Sure Schwartz made adjustments after struggles early, but Brady and Co. made their own in the second half.

When all was said and done Sunday night, these two teams combined for 74 points and a single-game NFL record 1,151 total yards. We can focus on the players on the field. And they’ll get a majority of the credit. But these offensive coaches did one heck of a job in this one.

Tom Brady is clearly GOAT, and it’s not close

No matter what happened at the end of Super Bowl LII, Brady’s performance was going to go down as one of the greatest ever. In his eighth Super Bowl as a starter. With pretty much the entire stadium in Minnesota rooting against him. Without his No. 1 receiver on the field for a vast majority of the game. Despite all of this, Brady absolutely dazzled onlookers in every possible way.

The numbers themselves are absurd. Brady completed 28-of-48 passes for 505 yards with three touchdowns and zero interceptions in yet another brilliant big-game performance from the greatest to ever play. Sure people will focus on Brady’s game-sealing lost fumble late in the fourth quarter. We get it, he’s not perfect. Though, that’s not the point here. If it weren’t for what the five-time champion did throughout the game, New England would have been absolutely blown out. Let’s use that as a major takeaway, instead of focusing on one single play.

The long wait it over

From Reggie White and Randall Cunningham to Harold Carmichael and Ron Jaworski, Eagles greats of the past have been vindicated. It might have taken decades. Some of those greats might not be with us anymore. Years of playoff failures. Years of fans in Philadelphia wishing for the best while expecting to be disappointed. The Andy Reid-Donovan McNabb years. All of this came to a culmination Sunday evening in Minnesota.

We give fans in this city a bad time. And in reality, they deserve a lot of what comes to them. But for one night, the Philadelphia Eagles’ organization and its fans reigned supreme. It was a long time coming. Too long. That has to make Sunday’s upset win over New England even more special for this long downtrodden franchise and fans that have been through hell in the past.