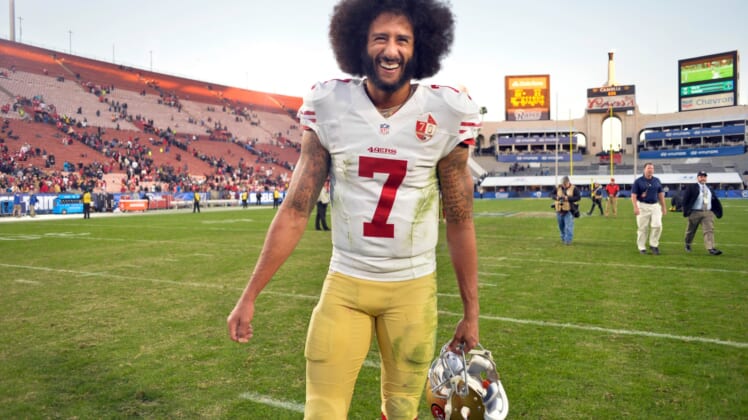 It’s looking more and more like free-agent quarterback Colin Kaepernick will return to the NFL for the 2020 season.

Kaepernick has not played since the 2016 campaign after he initiated the well-known national anthem protests to help combat racial inequality in the United States.

Speaking to league insider Jason La Canfora on 105.7 the Fan in Baltimore on Wednesday, the NFL’s Head of Football Operations indicated that Kaepernick’s body of work warrants an opportunity to compete for a job this season.

This comes shortly after NFL Commissioner Roger Goodell encouraged a team to sign Kaepernick during the weekend. The reversal of course from the NFL relating to Kaepernick and the entire Black Lives Matter movement is something else.

It was less than two weeks ago that Goodell himself took to the media as a way to admit the NFL mishandled the Kaepernick-led protests from years back. The longtime league head also noted that he fully supports the Black Lives Matter movement and the ongoing protests around the United States.

To say that this statement shocked fans and the media alike would be an understatement. The NFL had faced widespread criticism for its handling of protests in the past. It has now decided to commit $250 million over the next decade to help combat “systemic racism,” as the league calls it, in the United States.

Will Colin Kaepernick play this season?

Seattle Seahawks head coach Pete Carroll noted last week that an unnamed team is interested in the Super Bowl quarterback. Carroll also admitted that he regrets not signing Kaepernick back in 2018. Seattle has a need at the backup position behind Russell Wilson. This free-agent could make sense.

All of this comes amid other reports indicating that there’s a growing belief around the NFL world that Kaepernick will return to the league this coming season.