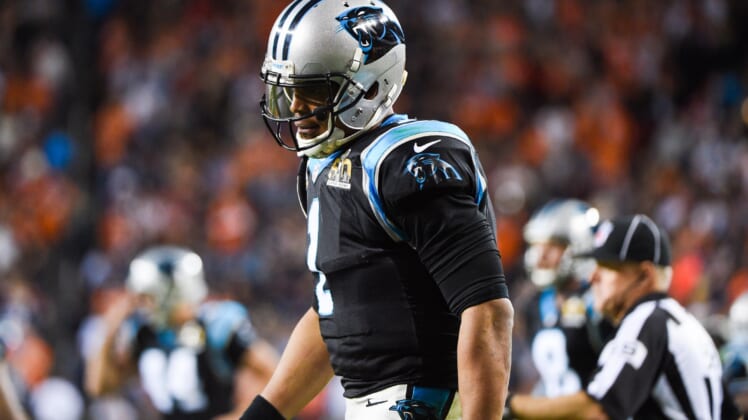 And just like that the 2015 NFL season has come to a conclusion. It ended with somewhat of a whimper at Levi’s Stadium Sunday evening as the Denver Broncos defeated the Carolina Panthers 24-10 for the franchise’s third championship.

There is so much to take out of this game. Who performed at a high level? Who stepped up when it counted the most? Who played the role of a goat in a game that represented the biggest of his career?

Here are your top 10 takeaways from Super Bowl 50.

We can talk about how Denver’s defensive line dominated all we want. And in reality, that didn’t help matters much for Newton.

However, the NFL MVP was off all game long. From missing wide open receivers to failing to get rid of the ball on time, he didn’t look anything like what we had seen during the regular season and in the lead up to the Super Bowl.

Overall, Newton completed 18-of-41 passes for 265 yards with zero touchdowns, one interception and two lost fumbles. It represented his worst statistical performance since October of 2014.

It’s too bad that after all the crap Newton faced in the two weeks leading up to the Super Bowl he couldn’t perform at a higher level on football’s grandest stage. This will only provide skeptics and naysayers with more fuel to criticize him.

Though, the criticism regarding Newton’s performance on Sunday would be justified. He was inaccurate, mistake prone and simply didn’t make good football plays. That’s on him.

More than that, a lack of effort to recover a late-game fumble with his team down by just one score was a really bad look (watch here).

This is something that’s going to stick with Cam on a personal level. He was pumped up to prove all of his naysayers wrong and failed at every possible turn.

We can sit back and blame Newton for what was a horrible Super Bowl performance. That’s more than justified. What we can’t do is ignore the fact that his offensive line did him absolutely no favors.

Newton was sacked six times and hit a total of 13 times on 47 drop backs. To put that into perspective, the MVP was sacked just twice in Carolina’s two postseason games heading into the Super Bowl.

As we saw with Tom Brady against these very same Broncos in the AFC Championship game, no quarterback is going to have much success facing this onslaught of pressure.

On the other side of the ball, Carolina’s defense also came to play big time in this one. Manning was sacked five times and hit another five times in the 24-10 Broncos win.

That would have normally been enough for Carolina to come out on top. Unfortunately for Ron Rivera and Co., the offense didn’t do enough to get the job done. That starts with the losses in the trenches.

It was important for Denver to have success out of the gate. While the Broncos had to settle for three points on their opening possession, it put them on top in a contest where the running game was going to be a critical part of the game plan with Manning struggling to do much down the field at this late stage in his career.

The opening drive success, which started with passes on the Broncos’ first four plays, enabled the team to go with a run-based attack for the remainder of the game. It also opened up rushing lanes for C.J. Anderson as the game drew on.

This was obviously one of the primary reasons Broncos head coach Gary Kubiak decided to come out of the gate passing the ball.

That’s what happens when you have two weeks to plan for a game. You go through all the possible scenarios in your playbook and come away with something that you believe will work best.

And while it only resulted in a field goal, it set the Broncos up extremely well for the remainder of the game.

4. Just a bad performance from both teams

If this was the best that football had to offer, then the NFL itself is in bad shape. Six turnovers, 18 penalties and a combined 11 sacks. Heck, the two teams combined for a total of two touchdowns on offense.

Sure we can look at the defenses being dominant, but it was a lack of any sort of success on offense that made this Super Bowl one of the worst in the modern history of the game, at least when it comes to watchability.

The two teams combined to convert on 4-of-29 third-down opportunities with Denver finding success just one time on 14 chances. Meanwhile, it took 131 plays for the two squads to combine for just over 500 yards of total offense. Think about that stat for a second.

More than anything, the lack of rhythm on the offensive side of the ball was alarming. Carolina and Denver combined for 79 yards on their final 13 drives. Talk about ending a poorly played game that ended with a whimper.

The interesting dynamic here is that both Carolina and Denver were top seeds in their conference heading into the playoffs — meaning that they were apparently the best the NFL had to offer. That’s definitely not how it played out Sunday evening.

5. Von Miller is a beast

Including a strip sack of Newton that resulted in a Broncos touchdown in the first quarter, Miller racked up a total of 2.5 sacks on Sunday night. The last sack pretty much wrapped this game over the Broncos late in the fourth quarter (watch here). It also handed Miller the game’s MVP award.

Almost as important, he showed an ability to make a difference in other aspects of the game.

The pass rusher actually did a darn good job in coverage against Jerricho Cotchery down the field on an important third-down passing play just out of halftime.

This showed us just how well rounded Miller’s game is heading into free agency — a free agency period that should see him earn a ton of cash.

Riding off into the sunset on a bronco. That’s almost literally what Manning did Sunday night in leading Denver to an upset win over the Panthers.

It wasn’t the best of performances from Manning. He completed 13-of-23 passes for 141 yards with zero touchdowns and what was a pretty bad interception (watch here). In fact, Manning finished the postseason with two touchdowns and that one pick in three games.

Simply put, Manning is a shell of his former self. He doesn’t possess the arm strength that made him the top pick of the Indianapolis Colts back in 1998. Instead, he acted like nothing more than a game manager.

In the end, that’s not really how history is going to tell it. Manning is now one in an elite group of quarterbacks to have won two or more Super Bowls. And by virtue of Sunday’s win, he surpassed Brett Favre for the most wins (200) for a quarterback in the history of the game.

Here’s to hoping this is the last we saw of Manning on the field. Such a brilliant career should end with him hoisting the Lombardi. Anything less wouldn’t make much sense from here on out.

7. Amazing introduction of the past Super Bowl MVP winners

There is not one football fan out there who didn’t get chills when they announced every single MVP winner from the previous 49 Super Bowls.

At a time when there has been a ton of criticism regarding halftime performances, the NFL’s entertainment choices and even those calling the game, this was an absolutely amazing aspect of the pre-game festivities.

More than anything, it was really cool seeing old timers like Bart Starr, Fred Biletnikoff and Roger Staubach honored during the announcements. They represent the individuals that have helped bring the game to what we saw Sunday night at Levi’s Stadium. Well done, NFL.

8. Panthers couldn’t get out of their own way

We talked about Cam Newton’s struggles. We also covered just how poorly Carolina’s offensive line played. While these are going to be the two narratives following what was a disappointing performance from the Panthers, there is a lot more to look at here.

Carolina committed a total of 12 penalties for 102 yards, including four penalties of the 15-yard variety.

From Tre Boston’s dumb unsportsmanlike penalty in the third quarter to Trai Turner failing to cede to the end of the play, Carolina wasn’t anywhere near the disciplined team we saw during its 15-win regular season.

This was primarily on the offensive side of the ball. Carolina’s defense performed at an extremely high level, allowing just 194 yards and 11 first downs.

And that right there is where it has to be disappointing for Ron Rivera and Co. One aspect of the Panthers played well enough while the other side of the ball put up one of the worst performances we have seen from an offense in the recent history of the big game.

If there is one takeaway from Carolina’s performance on Sunday, it’s the simple fact that general manager David Gettleman has to find a way to get Newton some help on offense — something that just didn’t exist in the Super Bowl.

9. Panthers still set up well for the long haul

No matter how bad Carolina performed on Sunday, it still had a heck of a season. You don’t win 15 regular season games without accomplishing something.

With a young core that includes Cam Newton, Kelvin Benjamin and Luke Kuechly, the Panthers will be perfectly fine over the long haul. This wasn’t one of those teams that had a single chance at capturing the Lombardi Trophy. Instead, Newton and Co. should see themselves competing for the title for the foreseeable future.

The major questions heading into what should be an interesting offseason will surround the skill positions on offense and whether Carolina can retain Josh Norman.

Simply put, Newton is going to have to get himself some help on offense. That must come in the form of a No. 2 receiver behind Benjamin and a running back of the future. Carolina would also be smart to add a starting right tackle, as Mike Remmers was completely dominated on Sunday.

If all this happens, Carolina will be in a darn good position to contend for a conference title over the next several years.

10. Broncos will likely look much different in 2016

It didn’t take too long after Sunday’s win for the Manning family to speak out regarding Peyton’s future in Denver. While Archie’s comments that his son is likely done in Denver doesn’t mean that he’s retiring, it could be an indication that the future Hall of Fame quarterback sees the writing on the wall.

Equally as important for the Broncos, they have two major decisions to make when March comes calling. Brock Osweiler and Super Bowl MVP Von Miller are both slated to become free agents when the new league year begins.

Under current NFL rules, Denver can only place the franchise tag on one of these two soon-to-be free agents. Miller may seem like the obvious bet to earn this tag. But if the Broncos view Osweiler to be the quarterback of the future, that decision becomes a lot more difficult.

That’s a whole heck of a lot for the now defending champions to have to worry about less than a month after hoisting the Lombardi.

In this, it’s safe to say we are going to be seeing a vastly different Broncos team when August comes calling.