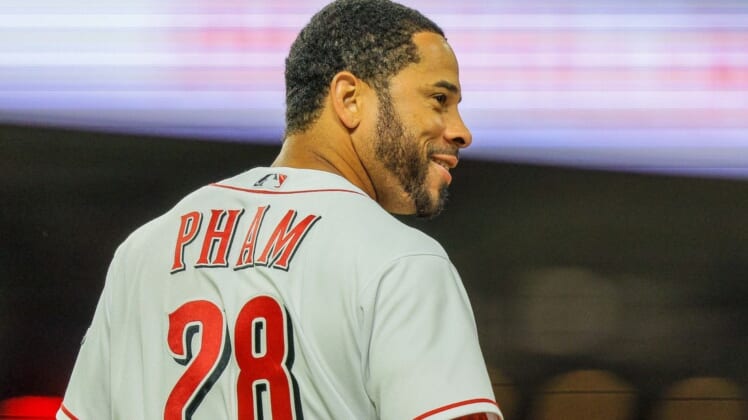 The suspension includes Friday night’s game in which Pham did not play, meaning he will miss the rest of the weekend series in Cincinnati. He also was fined an undisclosed amount.

“I slapped Joc,” Pham told reporters. “He said some (expletive) I don’t condone. I had to address it.”

According to Pederson, Pham slapped him in the cheek during pregame warmups because of a dispute stemming from their shared fantasy football league.

“It was a surprise,” Pederson said. “There was no real argument. He kind of came up and said, ‘Like, I don’t know if you remember from last year.’ And I was like, ‘Fantasy football.’ He was like, ‘Yeah.'”

Per ESPN, Pederson had been accused of cheating in fantasy football for placing a player on injured reserve and replacing him with a free agent.

Pederson said he has no plans to retaliate.

“Violence isn’t the answer. It’s over as far as I’m concerned,” Pederson said. “I won’t talk to him. I don’t think that he wants to talk to me, I don’t know. It was a weird interaction.”

Pham, 34, is in his first season with the Reds and is batting .233 with five homers and 17 RBIs in 42 games. He also has played with the St. Louis Cardinals, Tampa Bay Rays and San Diego Padres during a nine-year career.

Pederson, 30, entered Saturday’s contest batting .262 with 11 homers and 25 RBIs in 36 games in his first season with the Giants. He also has played for the Los Angeles Dodgers, Chicago Cubs and Atlanta Braves during his nine seasons.