Brady is aiming to participate in next month’s minicamp, however Arians isn’t overly concerned over whether or not the 43-year-old is ready to do so.

“I told him, ‘Just take it easy,'” Arians told reporters on Friday after the team’s first rookie camp practice. “He wants to get his arm in shape and he’s gotta take the time on that leg. You throw with your legs as much as your arm. He knows that so, ‘Just take your time and make sure you’re right.'”

Brady appeared on a Hodinkee radio podcast earlier this week and described his knee surgery as “pretty serious.”

“I had a pretty serious knee surgery this offseason, which is the first surgery I’ve had in about 12 years,” Brady said on the podcast. “I was really interested to see how it was going to go, because last year it just took a lot. Every week I was kind of tending to my knee, and I thought I would love to see a season where I can focus on some other strength stuff that I want to do, some other technique stuff where I’m not just focused on protecting my knee all the time.

“So It’s been pretty intense this offseason from that standpoint, because it’s been six and a half weeks that I’ve been dealing with the rehab process. The season went pretty long, obviously into February. It’s just now that I’m starting to feel like the offseason is happening. And I’m going to blink my eyes and the offseason is going to be over.” 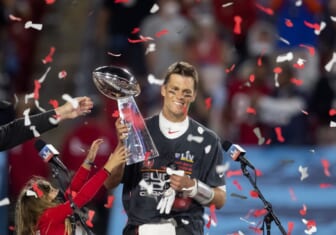 Three days after the Super Bowl triumph over the Kansas City Chiefs, Brady was spotted wearing a brace or sleeve on his left knee during the team’s victory parade.

Also, first-round pick Joe Tryon underwent arthroscopic surgery last month and Arians said he should be ready to practice by the minicamp. Tryon, a linebacker, was the 32nd overall pick from Washington.