The Players Championship: How the 17th hole at TPC Sawgrass brings out memorable moments 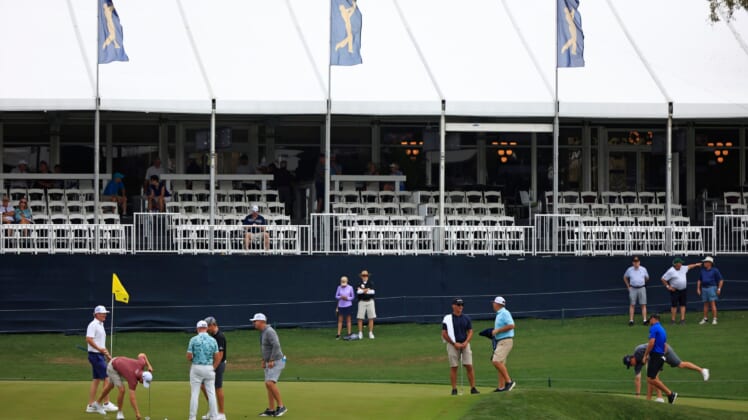 Most of the time on a golf course, players are accustomed to seeing fairways lined to the hole with difficult roughs, bunkers on either side and slight chance of a water hazard.

When it comes to the 17th hole at TPC Sawgrass in Ponte Verde Beach, Fla., that slogan comes into play with that 70% looking closer to 85% or 90%. Add in the factor of the wind and the hole becomes more challenging.

With the hole for The Players Championship designed as an island green, in addition to it being the second to final hole on the course, it could dictate the entire tournament.

Hitting a ball 132 yards over water is a lot harder than it may sound, even to the best golfers in the world.

“I think one of the biggest things on 17 is making sure you get the wind right,” 2019 Players Champion winner and World No. 6 Rory McIlroy told the media Tuesday. “There’s a high camera tower beside the 16th fairway and there’s usually a flag up on top, so you’re looking at that to see where the wind’s coming from and if it’s switching or if you’re getting any gusts from a different direction. That’s something to really take into account.

Then, it’s sometimes nice not to be the first one on the tee to see what your playing partners do so I’m not saying that’s a reason not to make birdie on 16, but sometimes it is nice to have a couple of guys go ahead of you to see what the ball is doing.”

However, there are times of not only bad moments, but also good and unusual at the 17th hole as the first round of The Players Championships that started on Thursday.

The good from the 17th at The Players Championship

In the history of the Players Championship at TPC Sawgrass, there have been nine aces with the most recent coming in the first round of 2019 when Ryan Moore holed out from 121 yards.

The pin location from Moore’s ace was in the front part of the green with a ridge behind the hole for players to hit the ball beyond the hole and let it roll down toward the hole.

One of the best shots off the tee, besides a hole-in-one, came in 2015 when Rickie Fowler was competing in a playoff against Kevin Kisner and Sergio Garcia.

The second hole of playoff came to the iconic 17th hole and Fowler’s tee shot took an aggressive line, on the right side of the pin with not much land to work with. The ball landed seven feet away from the pin and made the birdie putt to win the tournament.

In the previous 47 Players Championship, dating back to the first event held in 1974, there have been many historic moments, but none probably higher than what Tiger Woods did in the third round in 2001.

Entering the Island Green, Woods was 9-under par and three shots back of the lead. His tee shot would go beyond the short, left pin location, above the hill and on the fringe.

Woods, who was inducted into the Golf Hall of Fame on Wednesday, looked at the long putt and noticing it was going to break twice with a hill also to factor in.

As the ball was rolling the down the hill, NBC broadcaster Gary Koch and his analyst were even in awe for the difficulty of the putt saying the famous three words “Better than most” as the ball landed in the cup for a momentous birdie.

A lot of the unfortunate moments coming from this hole come from not hitting the correct shot for the ball to stay dry.

With water surrounding the green, players really have to judge their shots. Although a player’s shot may be on line, the green could be too hard and it rolls off the back into the water, especially when the pin is in the back.

For example, in the first round of last year’s tournament, the pin was in the back and a total of 35 shots – both from the tee box and the drop area – went for a swim.

With the amount of time a ball lands in the water in this hole, the average score for this hole is at or above par.

As much as there have been good and bad moments on the 17th hole, there have also been moments that you have never seen on a course.

Kevin Na walked in a putt in front of Tiger Woods

Kevin Na, who is from South Korea, has had a personal history of walking putts before they fall in the cup.

At the 17th hole a few years ago, Na was grouped with Woods and his antics were on display in front of one game’s best players.

Na, who had a four-foot putt, hit his putt and strode to the hole with his left foot, knowing he had already made the shot at about the ball being halfway to the cup.

Woods, who also had a short putt, was all smiles and replicated Na’s trick by walking in a putt of his own.

Matt Kuchar behind-the-back chip up against the water

With the design of the 17th hole, chances ae slim for a player’s ball to land at the edge of the grass above the water.

That exact situation arrived for Matt Kuchar during the second round of The Players Championship.

Kuchar, whose ball was centimeters away from the yellow penalty line, had two options: he could chip on his tip toes and his heels are over the wooden ledge or he could chip behind his back with the water and the down hill in play.

Ultimately, he went with the latter and chipped it with one hand risking everything being at even par. With the pin being on top of the hill in the back middle portion of the green, Kuchar bogeyed the hole and missed the cut by one shot.