How will the Tennessee Titans address their roster issues in the 2021 NFL Draft? Here's a look at who they could target with their top picks. 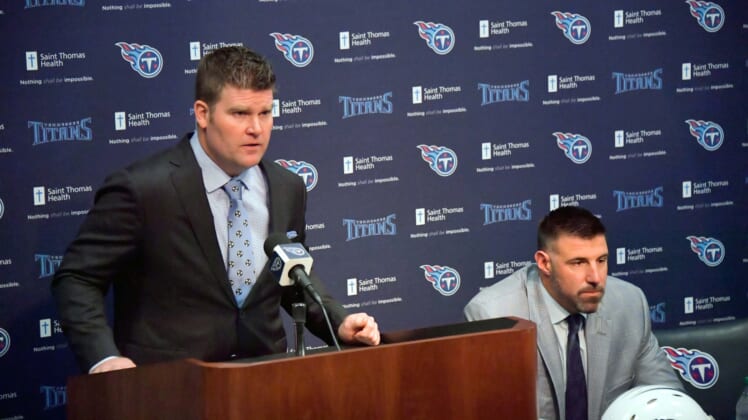 The Tennessee Titans are reigning AFC South champions, but after losing offensive coordinator Arthur Smith this offseason to Atlanta, can they maintain enough momentum to make the playoffs for a third consecutive season in 2021?

Much of how well Tennessee fares next season will come down to how it addresses dire needs in the draft. The most glaring weakness on the Titans’ roster is their lack of pass rush, but can they count on any rookies to have a game-changing impact, given their relatively late draft positioning? Where are the other holes Tennessee must address?

Let’s take a glimpse into the top prospects the Titans should target with their highest draft picks in the first two days of the 2021 NFL Draft.

Ossai and Collins should both still be free when the Titans go on the clock at 22nd overall, and either of them would be well-suited to fixing Tennessee’s issues on the front seven because of their versatility and knack for doing multiple things well.

To begin with Ossai, and why he’s listed just ahead of Collins here, he’s a true edge-rusher who’d also be a big asset in helping the Titans improve from a middling run defense. He’s not as productive as you’d like in terms of sacks, but part of that is due to the fact that Ossai began his college career as an off-ball linebacker. That unique background makes him a wild card Tennessee could move all over the place on passing downs, since Ossai is capable of dropping in coverage adeptly, too.

Collins is definitely the one with more ball skills and plays a truer inside linebacker position. He’s the type of leader the Titans would benefit from in the heart of their defense, and at 260 pounds, Collins is nimble enough to function in space, roam sideline to sideline and also rush the passer in specialist situations as either an interior blitzer or rusher off the edge.

The other route Tennessee could go is getting someone like Barmore, the College Football playoff national title game’s defensive MVP who dominated against the likes of Justin Fields and Ohio State, who has multiple future NFL players on their interior offensive line in Wyatt Davis and Josh Myers.

Beyond his obvious appeal at clogging running lanes, Barmore had eight sacks for Alabama in 2020, so he’d be able to push the pocket from the inside to open up chances for players like Harold Landry and Jadeveon Clowney if he returns in free agency.

Nose tackle DaQuan Jones hits the open market this offseason, and for someone who’s not as quick and sudden, he didn’t have the desired impact versus the run to justify bringing him back. The fit is pretty easy to draw a line to for Tennessee if McNeil is here, and he should be.

McNeil is a more sudden athlete than Jones who explodes out of his stance and can disrupt the passing game as well, evident in his 10 sacks, five pass deflections and one pick-six he had during his Wolfpack career of 32 games. The NC State star is a more athletic 0-technique than is common and is amazingly quick for his size, making him a phenomenal fit alongside Jeffery Simmons in the trenches.

The other route the Titans could go in Round 2 is taking the best receiver on the board, which could well be Moore by this point. Corey Davis is no longer under contract, and despite the fact that he’s a bigger body and Moore is more of a slot man, A.J. Brown already provides plenty of bigness and physicality on the outside to justify Moore slotting in with the 53rd overall pick.

If not the Ole Miss star who had 86 catches for 1,193 yards and eight touchdowns in only eight games this past season, perhaps someone who shares his first name in Washington’s Molden would do instead.

Molden can play either cornerback or safety at the NFL level, but Pro Football Focus graded him as the No. 3 safety in 2019 and the second-ranked player at the position in 2020. That’s pretty darn good value for Day 2 of the draft.

Averaging over 20 yards per catch and scoring 20 touchdowns over the past two seasons makes Dyami Brown one of the most intriguing pass-catchers in the 2021 draft class. The receiver class is pretty loaded with a myriad of first-round prospects, which means Brown is going to be a big value selection for whichever team is lucky enough to land him later on.

In the event the Titans see too much potential conflict in roles between veteran slot Adam Humphries and Ole Miss’ Moore, Brown seems like a better candidate to do his best work in the pros on the outside as a deep threat who can complement the possession receiver skill set of A.J. Brown — although he’s quite capable of making chunk downfield plays in his own right.

Going out as a national champion at LSU and then opting out to focus on draft prep was probably best for Shelvin’s long-term NFL outlook, yet it may also result in his stock continuing to tank. Unless he puts together some sort of pro day work out and blows the doors off testing, he’s liable to continue flying under the radar, which would be great news for Tennessee.

Shelvin is an absolute tank at 346 pounds, and the notion that run-stopping specialists aren’t valuable in pro football is somewhat baffling. By commanding double teams every time he’s in the game, Shelvin is the type of disruptive force who can make life easier for Simmons on the inside and create one-on-one matchups on the edge. Once Tennessee shifts into subpackage looks on the defensive line, blockers will be thrown off by the change of pace even more if Shelvin is pounding them on first and second down.

Finally, we arrive at Smith, from a less-heralded program at UAB who nevertheless has some intriguing traits such as his 6-foot-7 length and wiry, natural bend around the edge that could make him one of those late Day 2 steals. If Ossai is the pick in the first round, though, it’s unlikely Tennessee will invest in the edge spot again until the final day of the draft, opting instead to either focus on re-signing Clowney as a solution or pursuing another free-agent star.

The more the ideal mock scenario was marinated on, the more sense it made to address the skill positions earlier, because Moore brings a new element to the Titans offense that could help offset the potential loss of Davis to the receiver corps and also present opponents with a new variety of personnel looks now that Smith is the Falcons’ head coach.

Don’t be surprised if Moore can thrive on the outside, too. At the very least, Moore, typical slot man Adam Humphries and Brown would give opposing secondaries a lot to think about in 2021, on top of the elite, Derrick Henry-led rushing attack.

Ossai just makes the most sense in terms of how much upside he still has. For someone like Vrabel who was a defender with a similarly versatile skill set, Ossai would have the perfect mentor in Nashville to see his game blossom at the NFL level should he and Vrabel team up.

Thanks to Simmons’ presence at defensive end in the Titans’ predominant 3-4 alignment, there’s less need for quickness on the inside in the form of someone like NC State’s McNeill. That’s why Shelvin gets the nod as the ideal pick in the third round. He’s just too big and has faced too much good competition not to have a major impact in the NFL at least on running downs.

With the inside track to win the AFC South again due to Indianapolis’ uncertain quarterback situation, Jacksonville being in a rebuild and Houston botching its management of Deshaun Watson, it’s up to Tennessee to address its glaring holes and take the next step to a Super Bowl while the window is open.