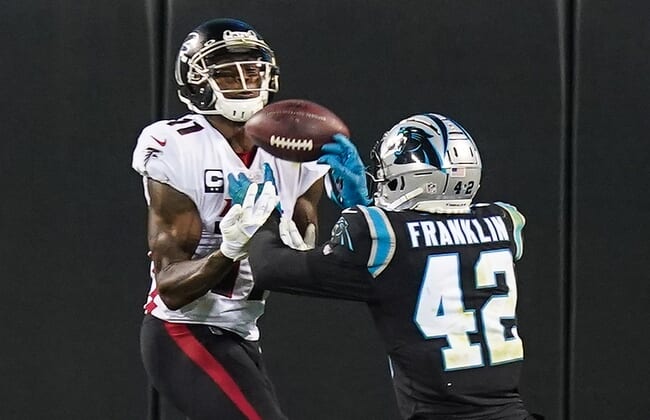 The Falcons agreed to send Jones and a 2023 sixth-round pick to Tennessee in exchange for a 2022 second-round and 2023 fourth-round selection, ending weeks of speculation surrounding the 10-year veteran.

Jones, a seven-time Pro Bowl selection, will join A.J. Brown as wideouts on a Titans team that features bruising running back Derrick Henry. Jones caught 51 passes for 771 yards and three touchdowns in nine games in 2020, when his low production was a byproduct of injuries.

Brown, 23, has actively been campaigning over social media for Tennessee to acquire his “idol” Jones. After ESPN first broke the news of the impending trade, Brown took a bow on social media Sunday for his efforts, writing “I need my commission from them recruiting videos @Titans.”

I need my commission from them recruiting videos @Titans pic.twitter.com/CRBgLdlmG6

He told ESPN that the addition of Jones will make the Titans offense all the more dangerous.

“It takes some of the tension off of me and with Derrick (Henry) and Ryan (Tannehill) with Anthony (Firkser),” Brown said. “Having another dominant guy on the other side, everybody has to be honest. Now, you don’t know who’s going to hold who. I may get CB1 or Julio may get CB1. But whoever gets CB2, (that cornerback) is going to be in trouble. It’s going to be fun.”

Henry led the league in rushing with 2,027 yards and added 17 touchdowns in 2020, earning Offensive Player of the Year honors.

Calvin Ridley will become the No. 1 wideout on Atlanta with the departure of Jones. The Falcons picked up the fifth-year option on Ridley last month.