It seems that there is one key hurdle that is holding up any potential Brandin Cooks trade from the Houston Texans.

The Texans currently have the second-worst record in the NFL and look to be headed to a third straight losing season. Like several other teams at the bottom of the NFL standings barrel, the Texans have quickly become a team league observers see as an organization that could be sellers at the Nov. 11 NFL trade deadline.

One player that has reportedly drawn a good deal of interest from around the league is nine-year veteran Brandin Cooks. The former Saints and Rams talent has had six seasons with over 1,000 receiving yards, including last season. So it’s no surprise that teams around the NFL view him as an impact player that could quickly change their fortunes or improve their Super Bowl chances.

However, a new report claims there is a major sticking point for teams interested in trading for the 2014 first-round pick.

On Friday, Pro Football Talk’s Mike Florio revealed that suitors for Cooks’ services are balking at the idea of paying him the massive amount of money he is guaranteed next season.

“As one league source explains it, teams won’t touch the current Cooks contract because it carries a fully-guaranteed contract of $18 million in 2023. This means the Texans may have to assume some of the financial obligations in order to get someone to take Cooks off the books — and to give the Texans value for the player.”

This is a major problem for the Texans. Cooks is their best player on offense, and in giving up such a key talent an organization should want a strong return. Taking a return of day-three draft picks would just seem like a loss for Houston in any potential deal. 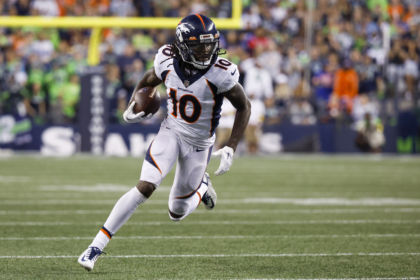 However, paying a large some of the money for Cooks to star elsewhere would be a tough pill for the team and fanbase to swallow. It seems like possibly trading Cooks next season might have a higher upside than doing so in 2022.