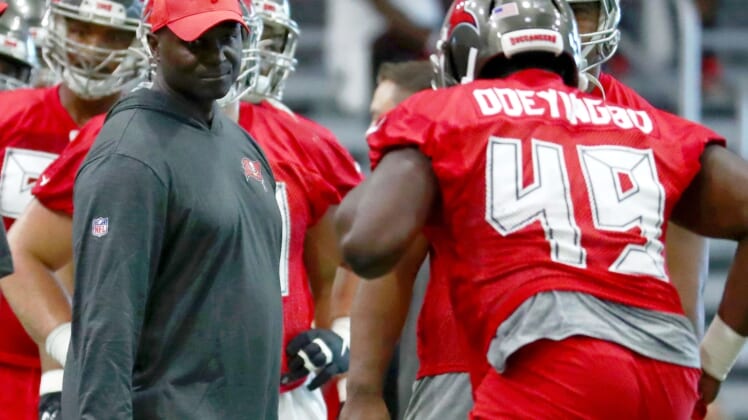 The Buccaneers are looking for a better showing than Week 12, when Mahomes lit up Tampa for 462 passing yards and Tyreek Hill posted 269 receiving yards and three touchdown catches.

“They play fast, but they understand football. They’re not just a track team out there,” Bowles said Monday via Zoom teleconference as Super Bowl media availability began. “They can beat you vertically or horizontally. They can keep you off-balance a lot.”

Hill became the third player since 1980 with 200 yards receiving in a single quarter — the first quarter — to set the tone for the Chiefs.

Part of the challenge for Tampa is finding solutions on third downs, where Kansas City seems to be unaffected by what might appear dire to a typical offense. In the playoffs, the Chiefs have converted 55 percent (11 of 20) of third downs to a new set of downs. The Chiefs converted 49 percent (95 of 194) in the regular season on third down.

“Look very comfortable for them, they convert a lot of them,” Bowles said. “Whether Pat does it with his arm or his legs. They’ve got a slew of weapons.”

Bowles said the previous game against Mahomes was a good learning tool for the Buccaneers’ young secondary.

The group opted to meet before sunrise four days a week to focus on self-scouting and erase mistakes before the team gathers together.

The Buccaneers want to know where tight end Travis Kelce is on third down. Of his 105 receptions in the regular season, 79 went for first downs.

Kelce had 13 receptions against the Buffalo Bills in the AFC Championship Game. He ranks second among tight ends in postseason receptions (73), receiving yards (859) and touchdown receptions (nine), behind only Rob Gronkowski (83 receptions for 1,206 yards and 12 touchdowns).

“You know he can run and catch, but he’s such a smart football player,” Bowles said. “He plays with a high motor, understands the game and has a great rapport with the quarterback. … You marvel at watching him play. Somehow he finds a way to get open.”