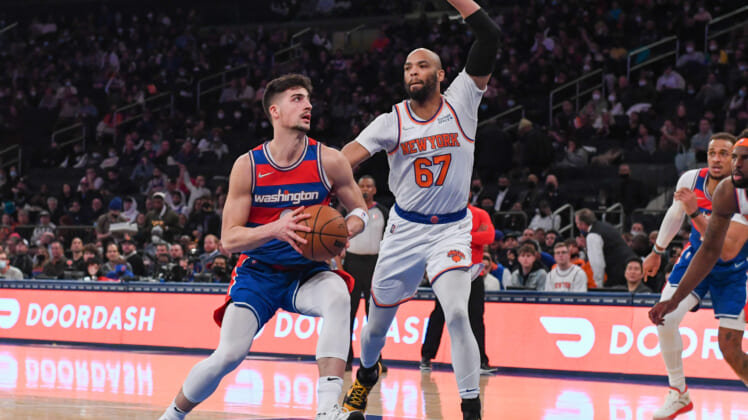 Color me shocked that Taj Gibson is actually set to be on a non-Tom Thibodeau-led team for just the fifth time in his soon-to-be 14-year career. Shortly after being let go from the final year of his contract, word emerged that he planned to sign with the Washington Wizards as long as he cleared waivers.

A few days later, Gibson signed a one-year, $2.9 million contract to play in Washington for the 2022-23 season. While the signing isn’t one that will generate headlines or cause many to rush to buy his jersey, adding Gibson to the roster is a wise move for this team. Let’s get into the why.

Taj Gibson is one of those unsung heroes every team needs

The first thing to understand about the Taj Gibson signing is that he’s not coming to Washington expecting a starting role or anything close. At 37 years old, he’s one of the eldest players currently in the NBA.

On his official Basketball Reference page, Gibson has the nicknames ‘Hard Hat’ and ‘Lunch Pail’ attributed to him. That picture you see up above of him diving for a loose ball? That’s exactly who Gibson is. He’s not afraid to do the dirty work required to come up with an extra possession to help his team.

Gibson’s never been a strong offensive player, but he can hit a mid-range jumper if he has enough space and time and he’ll even nail the occasional three-ball (career 25.7% 3PT shooter). His best work offensively comes within 10 feet of the basket, where he can use an array of post moves to help him finish at the rack.

But make no mistake, he’s been brought in for his defensive effort and ability. He’s averaged a combined 1.6 blocks and steals per game in his career. More importantly, Gibson knows his role, both offensively and defensively. He’s not going to be a shot chucker, if anything he saves his energy for defense and chasing down loose balls.

He probably won’t come close to the 18.2 minutes per game average he enjoyed under coach Thibs last season with the Knicks. But the few minutes he does hit the floor, Gibson can set the tone defensively, providing a strong example of how Washington’s younger frontcourt players should play.

At the very least, Gibson will share the many veteran tips and tricks he’s learned from playing 896 NBA games in his career. For his new teammates like Rui Hachimura, Daniel Gafford, and even Deni Avdija, that added experience in the form of a capable player could work wonders over the course of a season. As Gibson gains respect and clout within the locker room, more players will feel they can open up and go to the vet for advice.

Sometimes a player’s value equals much more than what his contract amount or his stat production displays. For the Wizards, they hope Gibson can do just that. Even though he may not make a massive impact on the floor next season, Gibson could end up being one of their best offseason additions. Not bad for $2.9 million.

Related: Washington Wizards success will depend heavily on Kristaps Porzingis