In the WNBA‘s lone Friday night matchup, the Minnesota Lynx came away with a 90-89 overtime victory over the Las Vegas Aces.

Sylvia Fowles put up an incredible performance finishing with a season-high 30 points, 13 rebounds, four assists, four steals and four blocks. She is the first WNBA to record such a stat line in a game. In each of the Lynx’s past two games, the 14-year veteran has played out of her mind, averaging 28.0 points on 64% shooting, 16.0 rebounds, 4.5 blocks and 3.0 steals.

A’ja Wilson recorded her fifth double-double this season leading the Aces with 28 points, 14 rebounds and four steals. Liz Cambage also recorded a double-double with 18 points and a career-high 20 rebounds. Cambage’s 20 rebounds also tied a Las Vegas franchise record for rebounds in a game.

Kelsey Plum and Dearica Hamby each came off the bench to score 15 and 13 points respectively with the latter adding five assists.

Halfway through the first quarter, the Lynx took control of the game taking an 18-9 lead with eight points coming from Sylvia Fowles. However, the Aces would take over from there outscoring the Lynx 39-26 to take a four point lead into halftime.

A’ja Wilson helped pace the Aces scoring 19 of her 28 points in the first half. She was unable to keep up that production in the second half as she would shoot 2-of-7 from the field including an 0-of-5 fourth quarter. 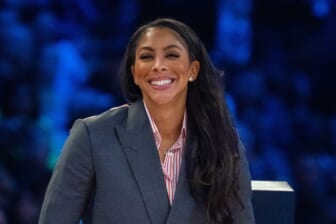 The Lynx turned the game in their favor in the third quarter outscoring the Aces 25-15 to take a 69-63 lead into the fourth quarter.

With five minutes remaining in the game, the Lynx led 79-69. From there, Kelsey Plum began to take over for the Aces scoring nine points over the next four minutes to help them get back in the game. A’ja Wilson culminated the run with two free throws with two second remaining in regulation to send the game into overtime.

Both teams would trade baskets in the overtime period with the Sylvia Fowles sealing the victory with a layup to give the Aces a three-point lead. After answering with a bucket of their own, the Aces had a chance to take the lead but ended the possession with a turnover.