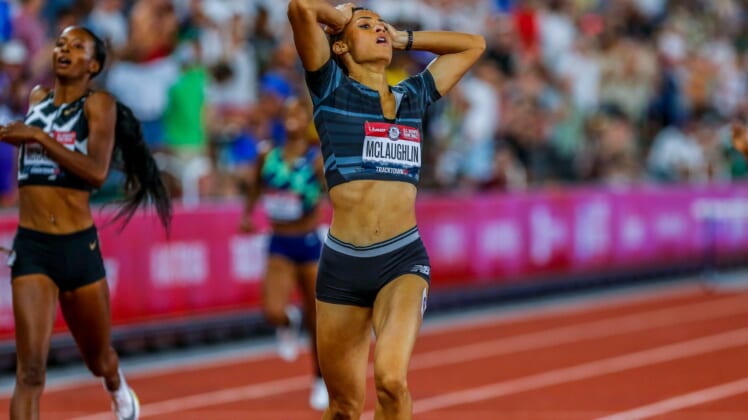 Sydney McLaughlin clutches her head as she breaks the world record for the women’s 400 meter hurdles at 51.90 seconds on the final night of the U.S. Olympic Track & Field Trials at Hayward Field.Md11978

On the final day of the Olympic trials, history has been made as 21-year-old Sydney McLaughlin ran 51.90 seconds in the final of the 400-meter hurdles setting a new world record.

She is now the first woman to ever run faster than 52 seconds in the 400m hurdles. Exactly three weeks prior to her run in the finals of the Olympic trials, McLaughlin ran her best time this season of 52.83 seconds in the American Track League meet.

The run beats her previous personal best of 52.23 that she achieved in the 2019 World Championships. At that same event, Dalilah Muhammad claimed the world record running a 52.16 beating out McLaughlin for the gold medal.

Muhammad not only ran in the race in which McLaughlin set the world record, she also held the previous Olympic Trials record in the 400m hurdles when she ran a 52.88 in 2016.

McLaughlin will look to claim her first Olympic medal in the 400m hurdles as she was eliminated in the semifinals of the 2016 Olympics.