One of the best defensive players of this century, and arguably the best today, both believe San Francisco 49ers defensive coordinator DeMeco Ryans would be a fantastic head coach in the NFL next season.

In just two seasons as a defensive coordinator in the league, former Houston Texans Pro Bowler DeMeco Ryans has made a serious impression on executives around the NFL. And why not, the 49ers’ defense was impressive in 2021, and utterly dominant this season. They are the major reason why the team has won 11 straight and are serious contenders to reach the Super Bowl next month.

That is why it is unsurprising that the 38-year-old has become one of the hottest head coaching candidates on the market in 2023. Ahead of the San Francisco 49ers Divisional Round game against the Dallas Cowboys, Ryans reportedly has interviews lined up with the Panthers, Broncos, Cardinals, and Texans.

Over the last week, two of the sport’s best pass rushers over the last decade spoke publicly about why Ryans is ready to make an impact in a franchise’s top coaching job.

Following the San Francisco 49ers Wild Card win over the Seattle Seahawks, NFL Defensive Player of the year candidate Nick Bosa explained why the man that helped lead him to two straight 15-plus sack seasons is built to be a head coach.

“He’s gonna be an unbelievable head coach at some point. He just knows the feel of the players and he listens to players when he needs to, and he makes his calls. He’s as good as it gets. I said a couple of weeks ago he’s the best defensive coordinator I’ve ever been around, hands down.” 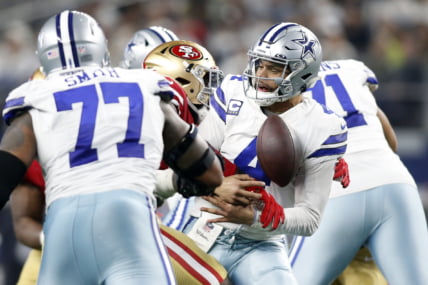 Another elite talent who came out publicly to support DeMeco Ryans is a man that played with him during the final season of his impressive run in Houston, JJ Watt. The future Hall-of-Famer took to his Twitter on Friday to praise Ryans’ influence and leadership.

Receiving glowing endorsements from two of the best defensive players to do it over the last ten years says a lot about the level of respect the San Francisco 49ers coordinator has around the NFL.