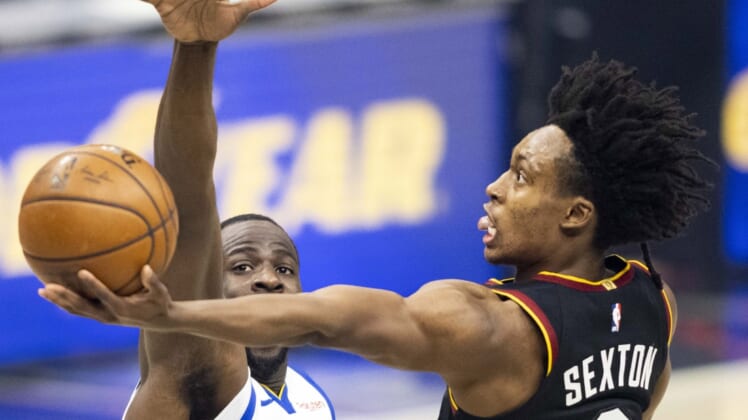 Stephen Curry once again led the Golden State Warriors, scoring 33 points in a 119-101 victory over the host Cleveland Cavaliers on Thursday night.

Despite struggling a bit early from 3-point range (4-for-13 for the game), Curry recorded his ninth consecutive game with 30-plus points to help the Warriors secure their fourth consecutive win and fifth in their past six games.

Collin Sexton returned after missing the previous two games with a left groin strain and led the Cavaliers with 30 points. But Cleveland lost for the third time in its past four games.

Curry dealt with frequent double teams on defense by the Cavaliers and shot 12-for-25 overall as he attacked the basket more often to break the perimeter pressure. He also finished with five assists, four rebounds and two blocks.

Andrew Wiggins finished with 23 points, six rebounds and six assists, and Juan Toscano-Anderson finished with a career-high 20 points on 8-of-9 shooting.

After trailing throughout the first quarter, the Warriors took the lead on their second bucket of the second quarter and never trailed again.

The Cavaliers cut the deficit to four points four times late in the third quarter, but Curry hit two free throws and then back-to-back 3-pointers to put Golden State back up by 10 at the end of the period.

Draymond Green had only five points, but finished with 10 rebounds and eight assists, and Kevon Looney also collected 10 rebounds.

Jordan Poole had 14 points and Damion Lee scored 11 as the Warriors’ bench outscored the Cavaliers’ reserves 45-23.

Darius Garland finished with 20 points and seven assists while Jarrett Allen had 17 points and 14 rebounds. Taurean Prince scored 12 points off the bench.

The Warriors announced prior to the game that rookie center James Wiseman will miss the remainder of the season after undergoing surgery on his torn right meniscus.

Forward Kelly Oubre Jr. sat out for the fourth consecutive game with a sprained left wrist and Eric Paschall was out for the seventh game in a row with a left hip flexor strain.