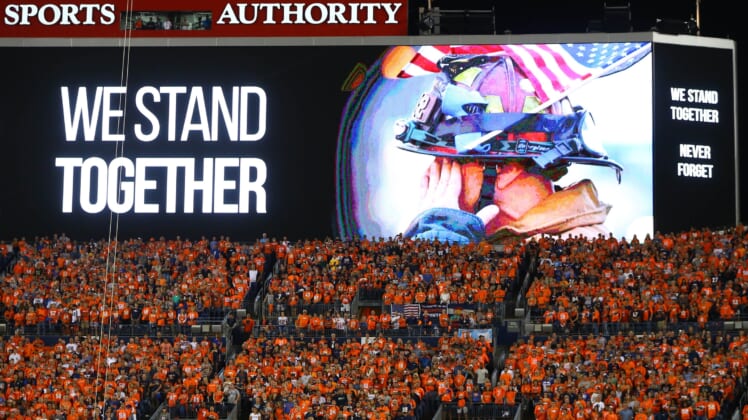 Sep 11, 2017; Denver, CO, USA; Denver Broncos fans in the crowd stand during a moment of silence in memory of those killed in the terrorist attacks of September 11, 2001 prior to the game against the Los Angeles Chargers at Sports Authority Field at Mile High. Mandatory Credit: Mark J. Rebilas-USA TODAY Sports

On the 20th anniversary of 9/11, the sports world joined together on Saturday morning to remember all those lost on Sept. 11, 2001.

The 9/11 attacks took the lives of 2,977 people, injured thousands more and forever changed the United States. Now, 20 years after a day that no one will ever forget where they were, the sports community is paying tribute to those lost and looking back on all that took place.

The NFL paid tribute to 9/11 victims during the national anthem before the Dallas Cowboys and Tampa Bay Buccaneers game on Thursday. When the New York Mets and New York Yankees face off at Citi Field on Saturday night, both teams will honor those lost and the Mets will wear special uniforms.

On a day that holds so much significance across the country, teams, athletes and reporters reflected on the 20th anniversary of September 11.

New York sports teams, who the impact of the 9/11 attacks most directly, also paid tribute to the lives lost on that fateful day.