The Storm currently holds the WNBA’s best record this season at 5-1 while the Fever have the worst record at 1-7. The loss for the Fever is their third straight.

The win for the Storm is the first for their new head coach Noelle Quinn who was promoted to the position following the retirement of previous head coach Dan Hughes. 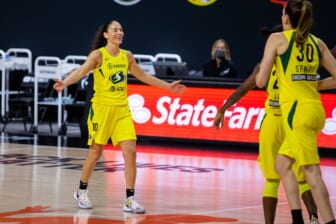 The biggest difference in the game was in 3-point shooting with the Storm going 11-for-22 while the Fever went 4-for-17. Jewel Loyd and Breanna Stewart combined to make seven 3-pointers in the game.

The first quarter was a back-and-forth affair up until the tail end when the Storm outscored the Fever 12-3 in the final three minutes to end the period with a 25-16 lead. Stewart and Loyd combined to score 21 of their team’s 25 first quarter.

Both teams traded buckets back-to-back in the first minute of the second quarter with the Storm continued hold a steady lead pushing it to as high as 12 points in the period. The Fever responded by going on a run to trim the lead down to three points. At halftime, the Storm led 43-38.

The Storm took over in the third quarter bringing their lead to a peak 15 points eventually ending the quarter up nine. The fourth quarter was not much different as the storm continued to hold off the Fever cruising to victory.

The Indiana Fever will look to get back in the win column on Thursday when they play on the road against the Los Angeles Sparks. Meanwhile, the Storm will look to extend their win streak on Friday when they host the Dallas Wings.