Seattle Seahawks quarterback Russell Wilson is happier on Tuesday after the franchise agreed to a contract resolution with left tackle Duane Brown following a prolonged stalemate this summer.

Brown, a five-time Pro Bowl selection, held out of practices during training camp to secure a new contract. While the Seahawks weren’t willing to sign the 36-year-old to a long-term deal, the two sides worked out a resolution before Week 1.

According to ESPN’s Adam Schefter, Brown agreed to a reworked contract that maxes out at $12 million this season and converts his per-game bonuses into guaranteed money. 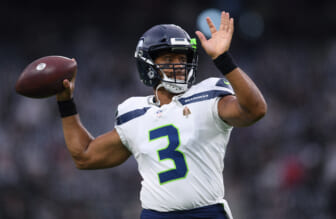 The 6-foot-4 left tackle surrendered just five quarterback hits and two sacks last season, per Pro Football Focus. Wilson, who was at odds with the Seahawks’ front office this offseason, backed his teammate throughout the negotiations.

Brown already returned to practice Monday in anticipation of an agreement being reached. While he doesn’t land a contract extension, he will be one of the top free-agent offensive tackles in 2022.

After entering training camp with Brown and All-Pro safety Jamal Adams sitting out practices, Seattle found a way to make both players happy. With all their key starters ready for the 2021 season, the Seahawks will be one of the top Super Bowl contenders in the NFC.