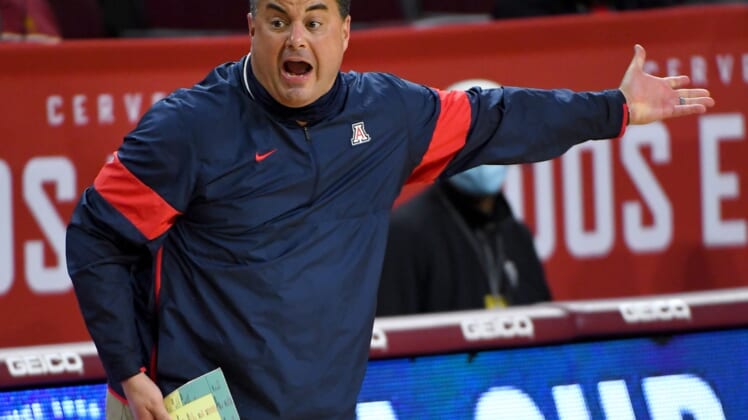 Miller compiled a 302-109 record in Tucson, leading the Wildcats to seven NCAA Tournament appearances and two trips to the Elite Eight (2011, 2015).

Arizona was 150-68 in the Pac-12 since 2009-10 under Miller, winning five regular-season championships and three conference tournament titles.

The Wildcats were 17-9 this season, 11-9 in the Pac-12, but were ineligible for the conference and NCAA tourneys due to a self-imposed postseason ban.

Miller, 52, had one year remaining on his contract.

Arizona announced its postseason ban in December amid an ongoing NCAA investigation into Miller’s program.

The Wildcats reportedly are facing five Level I violations and nine overall violations due to recruiting actions, dating back to the September 2017 arrest of former assistant coach Emanuel “Book” Richardson.

The university received the notice of allegations from the NCAA in October.

Back in June 2017, Richardson told undercover FBI agents that he paid $40,000 to a high school coach to ensure that Rawle Alkins was academically eligible to play for the school. Alkins played two seasons with the Wildcats in 2016-17 and 2017-18.

Richardson pleaded guilty in January 2019 to accepting $20,000 in bribes to steer players to Christian Dawkins’ sports management companies and other financial planners. Richardson was sentenced to three months in prison and two years of probation for his role in the corruption scandal.

During a trial in New York in April 2019, an FBI wiretap suggested Sean Miller “fronted” the deal to land highly recruited center Deandre Ayton to the school.

The call was intercepted on June 2, 2017, with Dawkins discussing the situation with business partner Munish Sood. Another call played in the courtroom recorded Richardson telling Dawkins that Miller was paying Ayton $10,000 a month, although Richardson later insisted “I have no knowledge of Sean Miller paying players or attempting to pay them.”

Ayton ended up signing with Arizona and played one season before becoming the No. 1 overall pick in the 2018 NBA Draft.

In February 2018, when allegations were first reported that Miller was involved with paying Ayton, the Arizona coach vehemently denied it.

“Let me be very, very clear: I have never discussed with Christian Dawkins paying Deandre Ayton to attend the University of Arizona,” Miller said. “In fact, I had never even met or spoke to Christian Dawkins until after Deandre publicly announced that he was coming to our school. Any reporting to the contrary is inaccurate, false and defamatory.”

Miller coached at Xavier for five seasons (2004-09) before joining Arizona, leading the Musketeers to four NCAA Tournament appearances and a 120-47 record.

Miller’s younger brother, Archie, was fired as head coach at Indiana on March 15.