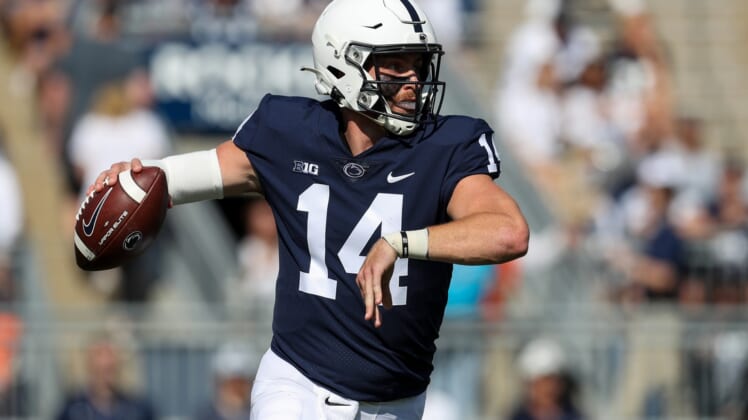 Sean Clifford accounted for two touchdowns Saturday as No. 13 Penn State cruised to a 44-13 home win over Ball State in non-conference action from University Park, Pa.

Noah Cain contributed 99 total yards and a touchdown for Penn State (2-0), which rode the momentum from last week’s road win against then-No. 12 Wisconsin. The Nittany Lions outgained the Cardinals 240-69 on the ground in their first game with fans at Beaver Stadium since November 2019.

Drew Plitt was 25 of 39 for 176 yards and two interceptions for Ball State (1-1). It did not help that the Cardinals managed only 2.7 yards per carry. Justin Hall led the team with six catches for 35 yards, while Parker Washington paced the Nittany Lions with six catches for 57 yards.

Penn State drove 75-plus yards to the end zone on each of its first two drives. Cain’s 5-yard TD run capped a 13-play march to set the tone for the contest, and then just over four minutes later, Clifford plunged in from 1 yard out to make it 14-0.

The highlight of the second quarter was Jahan Dotson’s nifty 25-yard touchdown catch in which he flashed some impressive footwork on his way to the end zone. Ball State kicked two field goals in the period — one in the opening minute and one at the halftime buzzer — to enter the locker room trailing 24-6.

Nittany Lions linebacker Jesse Luketa stepped in front of Plitt’s pass and made a one-handed interception, rumbling 16 yards to the end zone with about six minutes left in the third quarter to make it 31-6.

Penn State’s Jordan Stout tacked on two more field goals before the Cardinals scored their only touchdown on a 6-yard rush by Carson Steele with 6:54 remaining in the game.

Ta’Quan Roberson capped the scoring with his 23-yard pass to Theo Johnson with 2:10 to go.