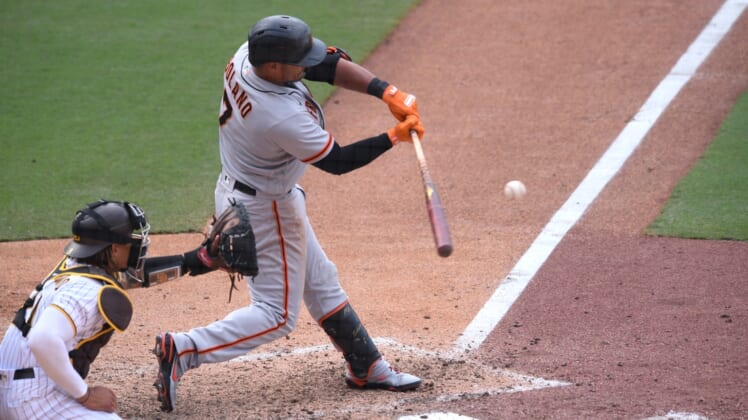 Dickerson was on second to open the extra inning and immediately moved to third on Austin Slater’s fly out to deep center. Mike Yastrzemski then hit an infield single, but Dickerson didn’t score until the following batter, Solano, flew out to right. Dickerson slid home just ahead of Wil Myers’ throw.

Submarining right-handed reliever Tyler Rogers got the win despite giving up Myers’ game-tying, two-out home run in the eighth. Wandy Peralta, who struck out Jorge Mateo with the tying run at third and one out in the bottom of the 10th, earned his first Major League save.

It marked the second time in as many outings that Giants starter Kevin Gausman was denied a victory by the San Francisco bullpen. Gausman allowed one run on four hits and a walk with five strikeouts while throwing 96 pitches over seven innings. Gausman has a 1.32 ERA over 13 2/3 innings to start 2021.

The Padres’ only score against Gausman came in the fifth. Jurickson Profar singled with one out, moved to second on a wild pitch and scored on Mateo’s two-out, line drive single to center.

It was a mistake by Mateo that gave San Francisco’s Darin Ruf a two-run homer off Padres’ starter Blake Snell in the second.

Evan Longoria opened the inning with a double into the left-field corner. After Mateo made a sliding catch in short center to deny Wilmer Flores a hit, Ruf hit a drive to deep center. Mateo went back and leaped as he approached the wall. Ruf’s drive bounced out of Mateo’s glove and behind the center fielder — bouncing off the top the wall and over it for the two-run homer.

Those were the only two runs and hits allowed by Snell in five innings. He issued four walks with eight strikeouts on 87 pitches.