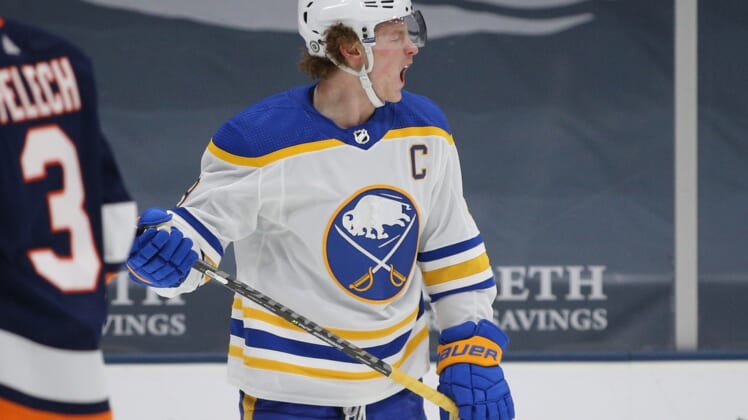 Eichel returned to Buffalo to be evaluated further and missed Tuesday night’s game at Philadelphia.

“We have an upper-body situation that needs some deeper analysis before we decide further,” Krueger told reporters after the Sabres’ 5-4 shootout loss. “He’s definitely out a minimum a week and has been back in Buffalo.”

Eichel will miss at least three more games and likely a fourth, given Krueger’s timeline.

Eichel notched an assist in his fourth consecutive contest during the Sabres’ 5-2 setback versus the New York Islanders on Sunday. However, he appeared to hurt his neck after a check into the boards by Casey Cizikas late in the third period.

He has just two goals in 21 games, although his 16 assists are tops on the team.

Eichel recorded a career-high 36 goals to go along with team-best totals in assists (42) and points (78) in 68 games last season. He also pieced together a 17-game point streak during the campaign.

He is in the midst of the third season of an eight-year, $80 million contract signed prior to the 2018-19 campaign.

Eichel has collected 355 points (139 goals, 216 assists) in 375 career games since being selected by the Sabres with the second overall pick of the 2015 NHL Draft.