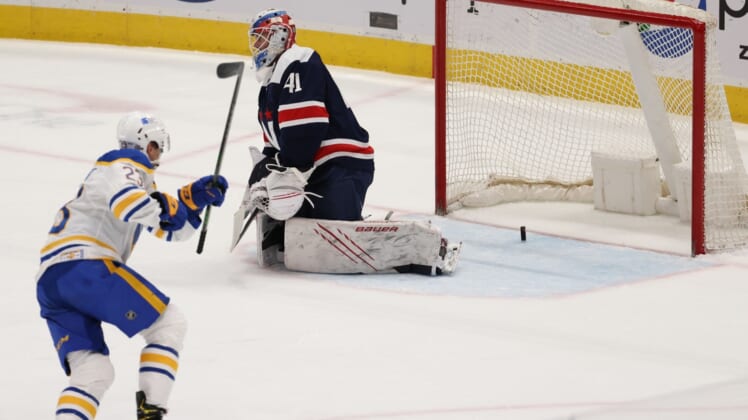 Anders Bjork had one goal and one assist, and goalie Dustin Tokarski earned his first win in more than five years as the visiting Buffalo Sabres defeated the Washington Capitals 5-2 Thursday night.

The Capitals saw their three-game winning streak end, and they finished the season series with a 6-1-1 record against Buffalo. However, the Sabres controlled the Thursday contest from start to finish.

Buffalo improved to 5-2-3 in the 10 games since ending their 18-game losing streak.

Bjork, recently acquired from Boston, got both of his points in a second period, during which the Sabres took charge. Tokarski finished with 27 saves and earned his first victory since Dec. 12, 2015, when he was playing for the Montreal Canadiens.

Washington held a long pregame ceremony to honor Nicklas Backstrom playing in his 1,000th career game — all with the Caps — and he went on to notch one assist in the milestone contest. However, his team came out flat and never found its way.

Buffalo was able to come up with several good scoring chances throughout the game and kept putting pressure on the defense and Washington starting goalie Vitek Vanecek, who was pulled after allowing four goals on 21 shots.

Craig Anderson replaced him, as Ilya Samsonov is day-to-day with an upper-body injury, and he stopped all eight shots he faced.

Sam Reinhart gave Buffalo a 1-0 lead with 1:10 left in the opening period, but Dmitry Orlov tied it 47 seconds later.

The second period belonged to the Sabres, though, as they scored three times. It started with a Capitals turnover deep in their own zone that led to an unassisted goal from Victor Olofsson just 96 seconds in.

Buffalo then made it 3-1 on Casey Mittlestadt’s short-handed goal after the Capitals turned it over in the offensive zone. Bjork made the pass that sprung him on the left wing, and the goal came 5:42 into the period.

Washington cut the deficit to 3-2 when Anthony Mantha redirected a John Carlson feed past Tokarski 9:59 into the period. But the Capitals’ sloppiness with the puck cost them again as they turned it over in their zone, and Bjork ripped a shot past Vanecek. That ended the goalie’s night with 6:37 left in the second period.