The Minnesota Vikings and Chicago Bears have gone to battle 122 times on the football field, in that time the Vikes lead the series 63-57-2. While the on-field scraps have been historic, their next fight could occur off the field, but it could directly alter each franchise’s course for the next 10 years or so.

Both NFC North rivals are in need of a new general manager this offseason after letting their previous decision-makers go. Whoever is hired in each organization will have final say on draft selections and many other big roster decisions during their tenure, however long it may be.

In other words, hiring a general manager might be the most impactful decision a franchise can make when assembling a team, with the eyes on the playoffs, and eventually the holy grail by reaching the Super Bowl.

So it’s no surprise to see teams taking their time hoping they make a call that sets their squad up for success, instead of making a decision that could set them back another five years or more.

Interestingly enough, both teams in need of a GM from the “black and blue” division could be directly competing with one another for the same candidate.

On Friday, we reported the Vikings were down to two finalists. Despite that, according to Vikings reporter Matthew Coller, Minnesota reportedly has its eyes set on hiring Kansas City Chiefs executive director of player personnel Ryan Poles for their GM vacancy.

The issue here is the Bears also are interested in potentially hiring Poles for their GM position. Poles has interviewed with both organizations once, and is set to meet with the Bears on Tuesday. The Vikings have their second interview scheduled one day after, on Wednesday.

It could set up an interesting dual that takes place at the negotiating table. Poles may or may not have a personal preference, a place he’d rather go perform his duties, but if not, he could very well pit the two franchises against one another in a bidding war for his services. 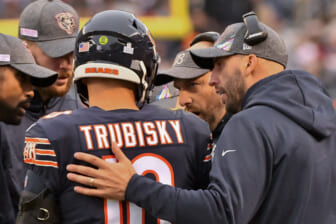